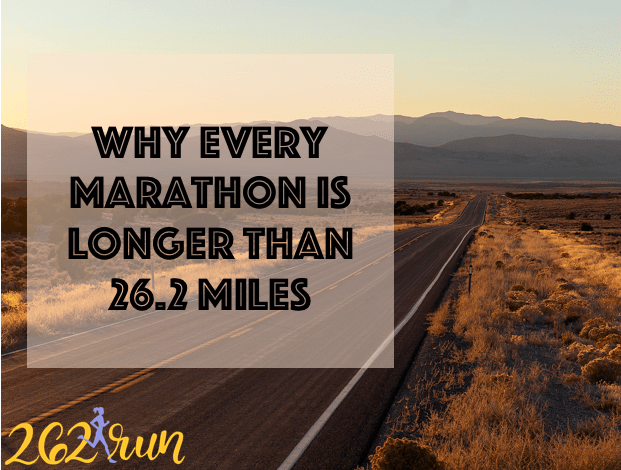 My time goal for my first marathon was to get a sub 4. A few miles into the race, I realized that my Garmin was counting a new mile before I reached the mile marker. By the time I crossed the line, I had run 26.6 miles. So rather than running 26 miles and 352 yards, I ran 26 miles and 1056 yards!

I had looked down at my watch when I hit 26.2 and it said 3:57. So in some ways, I reached my goal of running a sub 4, but not really because when it comes down to it, the official race time is what matters. I wish I had known that when you run a marathon, you will always run longer than the standard 26.2.  Had I known this, I would have adjusted my pace. Especially when running a loop course, with lots of turns, you cover considerable more than. I like loop courses because it makes race day logistics easier, but point to point courses will be closer to 26.2.

The FAQ page for the RnR San Diego addresses this, due to the fact that this course has so many twists and turns,

“On race day, if the distance shown on your Forerunner is slightly more than the official race distance, it just means you weren’t cutting corners—quite literally. According to the IAAF (International Association of Athletics Federation) course measurement guidelines (pg. 20), a road race course is defined by the shortest possible route a runner could take without being disqualified.

For most races, a certified measurer rides the course on a bike, staying near the curb and taking every available tangent. This ensures that all runners will run at least the declared race distance. After the race, if Forerunner shows that you ran a little farther, this just accounts for extra steps you took to run around others participants, hit a water stop or stay to the middle or outside lane.”

Probably didn’t need to make a post just about this. It’s one of those things I wish I had known going into my first race though. If you are going for a certain time, when entering it in the pace calculator, rather than enter 26.2, I always enter 26.5. Although with San Diego I ran 26.7! But basing it off running 26.5 is about the average I figure.

Some people will blame their fitness watch for getting the distance wrong-but now you know your $500 watch is not to blame!

I hope this helps someone preparing to run their first race!

If you wear a fitness watch-how long was your longest marathon? Which race were you closest to 26.2? Anyone run a race where they actually got 26.2??