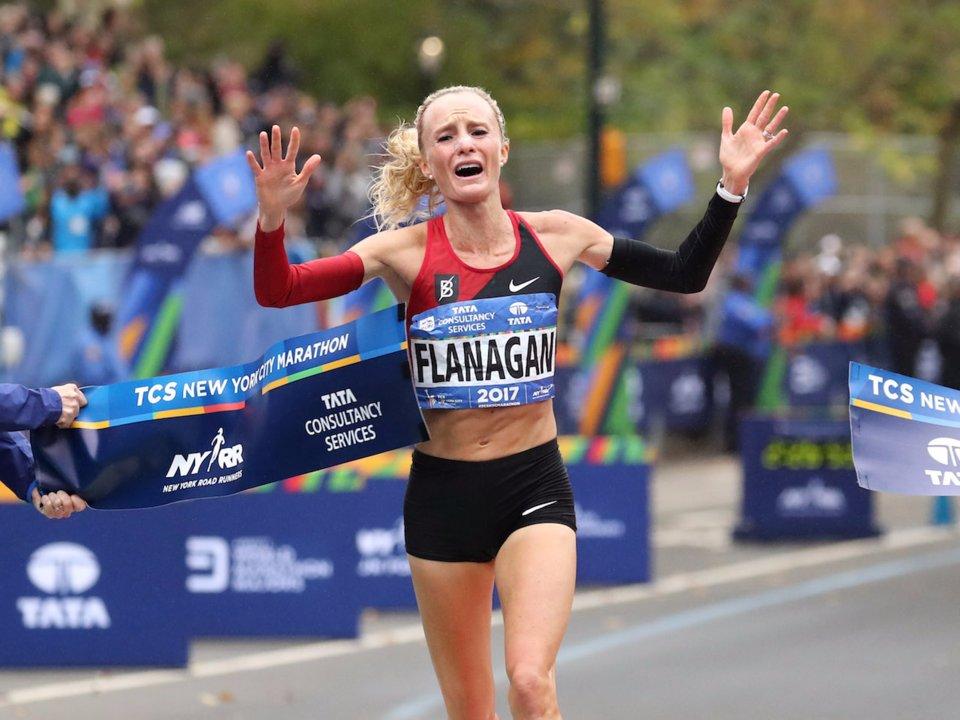 In November of 2017 I saw the famous picture of Shalane Flanagan winning the New York City Marathon. In the browse section on Instagram I saw other Instagram runners posting about running that same race. Seeing their posts, and seeing Shalane, made me decide I wanted to run a marathon (it had been on my bucket list, but I hadn’t ever seriously thought about it). I had recently bought a fitness running watch, so that also helped me to feel motivated to push myself!

We were living in Santa Monica so I signed up for the Los Angeles Marathon, over four months away. At the time, the longest run I had done was an 8 mile run. I had no idea how to train for a marathon and that first week after signing up for the LA Marathon, I started going to overboard. I had a painfully inflamed muscle on the inside of my right ankle and had to stop running for a few days.

After that I decided to hire a coach. At the time I was going to these group workout classes and the instructor had ran multiple marathons and had offered to coach me, so I accepted.

I began officially training and things were going great! Long runs were so exciting because each Saturday I was running longer than I ever had! That’s the great thing about training for your first marathon, each weekend your breaking records! I was running long runs at about a 9 minute pace, medium long runs at an 8 minute pace, mile intervals at about 7:30 pace and easy runs at about an 8:30 pace-definitely too fast for an easy run.

I had my 16 mile run on January 13, which I ran at an 8:48 pace. Afterwards I felt a pain that started in my glute and felt like it basically went down my leg. I should have mentioned it to my coach, but I didn’t want to take a rest from training. It was so exciting, and I was looking forward to my upcoming 18 miler. That following week I was able to hit my paces, so I figured it was fine. I remember feeling pain again during speedwork, but I just ignored it, hoping that if I didn’t acknowledge it, it would go away (a bad habit I had when dealing with something stressful).

The morning of my 18 miler arrived. During these training runs, I was doing all long runs along the beach path in Santa Monica. I was running along that path feel relatively good. Then at mile 14 I began feeling sharp pain in my right knee. I had to stop running and tried do stretches. I started running again. I took a few breaks here and there, but I made it till the 15th mile. The pain came back even stronger to the point where I simply could not run. Around the time I was near the Venice area on the path. The thought of hobbling the few miles back to the apartment in Santa Monica sounded horrible, but it wasn’t a convenient place for an uber to pick me up. Then I walked past the bikes you rent using the app on your phone, which Scott and I had used in the past. I unlocked one and thankfully, was able to bike with no pain. I rode home while struggling to hold back tears.

I walked into the apartment and plopped down on the coach. Scott could tell I was sad and defeated. I explained to him what happened and he consoled me. When he later went to the gym I began an Epsom salt bath, getting in and out of the tub was incredibly difficult (and dangerous, I should have had Scott help me). Once in the tub and alone I let it out and began crying, fearing what this injury would mean.

That first week I had to use crutches to walk around and at night the pain was so bad it kept me awake, so I started taking pain meds. I still went the gym, at first just doing upper body work. Throughout the whole injury Scott was incredibly helpful, kind, and sympathetic. He validated my frustrated feelings, but helped me to not wallow in self-pity. If it wasn’t for him, I doubt I would have been going to the gym, or getting out much at all that first week.

After two weeks it wasn’t any better, so I went to a physical therapist. Turns out the knee injury was from my hips being out of alignment, plus pushing my body too hard. She corrected my hips, and showed me different techniques to build hip strength and mobility. I still couldn’t run, but I could ride the bike at the gym, so I started focusing on that. I would bike for an hour to two hours and began to really enjoy it. So much so that when I was able to run again, I reserved one day a week for biking.

As far as running, I ended up being out of commission for two months. When I did start up again it was very slow and for 1 minute intervals. Not being able to run for that long and missing out on running my first marathon was incredibly hard. Then when I was able to run, it was incredibly hard having to start from square zero.

I went to the physical therapist consistently for a little while, but once I was no longer injured, it just wasn’t worth the $150 per visit. I now go to a chiropractor once or twice a month depending on how much I am running. I also still do the hip strengthening exercises I was shown. Basically, the Myrtle Routine as well as various banded walks.

Once I was able to run for a few miles at a time, I went ahead and signed up the San Francisco marathon, which was about four months away. While training for SF, I ran at a conservative pace, and ran my easy runs EASY. I also did hip strengthening religiously and was even more mindful of my diet. And I learned of all sorts of recovery tools to help ease soreness.

Finally running my first marathon was all the sweeter, considering how long it took and the struggle I had faced.

That injury showed me how important running is to me and how committed I was to fulfilling my goal of running a marathon. In Meb’s book 26 Marathons, he talks about setting a long term goal that means something to you. If you’re not passionate about it, then when the struggles inevitably come, you’ll just give up. But you need to hold on to what you want, and be willing to put in the work, and be patient because goals aren’t always achieved as quickly as you may wish.

I have now been running injury free for over a year, I have ran three marathons and have my fourth coming up in three weeks! I’ve learned a lot over the past few years. From how to start running in the first place, to then training for your first marathon. Like most people, I started running to lose weight, but it has turned into so much more! I truly think that God lead me to running long distances to help me with the struggles in life. It has made me stronger, more resilient, patient, determined, helped me appreciate the human body and all it can do, and I’ve proven to myself that I can achieve goals despite setbacks.