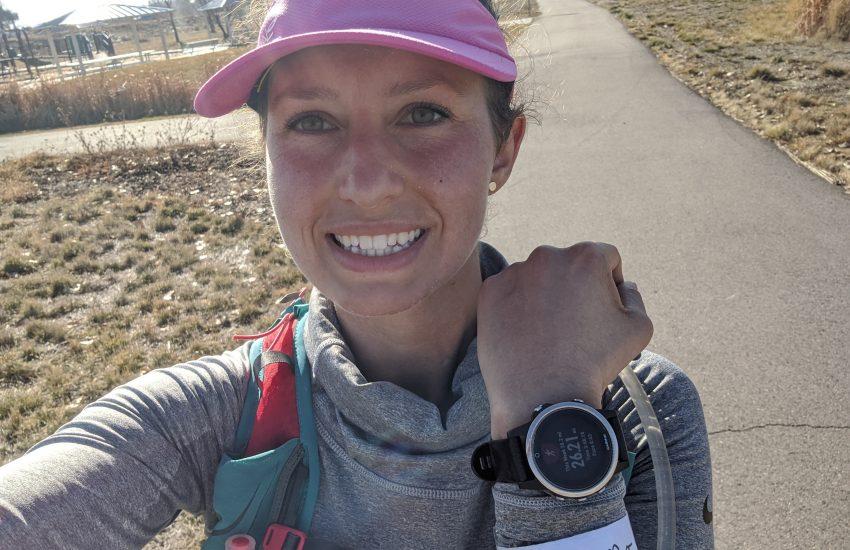 A few months ago, when I was back running post IT band injury, I decided I was ready to start marathon training again! I signed up to run the Tucson Marathon for the second year in a row (Yes, I know in my original review I didn’t give it stellar marks. But it was the right time frame, and we have a close family member who recently moved to Tucson, plus the course is downhill and is at a lower elevation than Utah so I was confident I could get a new personal record aka “PR”).

(Click this link if you want to read about the virtual half marathon I did in April (during the COVID19 virus), 5ish months after this marathon! And check this out if you want some tips for running a virtual race!)

Training went really well. I ran my first half marathon ever during this training cycle and that race went better than planned! This cycle I got in one 20 miler and one 22 miler, both of which also went really well! My speed sessions were also right on target, or even better! I was feeling so ready for Tucson and for a shiny new PR. My husband also got me this massage gun which I have been loving (I have it included in my list of Christmas gifts for runners)! Its definitely helped my muscles recover quickly as well as aid in my IT band recovery.

However, just a few days before the race there was a family emergency that came up and my husband and I were not able to go to Tucson. I was of course disappointed in missing the race. I was all tapered down though, and had started carbing up, so I decided I would still at least run the marathon distance, even if I couldn’t run an official race.

I was going to run it on Saturday (the same day as the Tucson Marathon) but the weather said it would be rainy/snowy Saturday morning, so I opted for Friday instead. (BTW the weather ended up being beautiful on Saturday!)

I run my long runs along the Jordan River Parkway Trail which is like 40 miles long! (Also it’s not a “trail”, more like a bike path). It has bathrooms and water fountains every few miles, though most of them are currently closed till springtime. Luckily there are still a couple that stay open through winter.

I usually park halfway between my house and the trail, but I didn’t want to be dealing with cars and traffic lights during miles 23-26, so I decided to just drive a bit further and park right at the trail. Because I ran on a Friday, the trail itself was pretty empty, so it was nice not having to worry about dodging fellow runners or cyclists.

The night before I maybe felt a little nervous, but it’s definitely not the same kind of nerves you get before an actual race. And no stress about sleeping through an alarm, missing the race shuttle, or anything like that which was nice. I woke up at about 6:15am and had my usual pre-race oatmeal. I got dressed and ready the same as I would for a race (including my must have anti-chafe for sensitive skin) The main difference from this run and a race was that I would need to bring my favorite hydration pack for running, the Osprey Duro 1.5, which I use on all my long training runs. I was worried having the hydration vest would slow me down, but it ended up feeling fine! I don’t bring it for races because I just get water/electrolytes from the aid stations.

That morning was incredibly foggy, as I drove to the trail the fog thickened even more. It was in the mid 30s, and I knew the sun would start to come out near the end. I decided a long sleeve was the way to go and went with the Nike one you see me wearing in the below pictures because it has a turtle neck type thing. A couple miles in though I was warming up and could have just worn a normal long sleeve. I just rolled the neck down and that was fine. Overall I never got that uncomfortable due to what I was wearing.

Once parked at the trail, I drank the pickle juice shot (the same kind I had before the half marathon) and was on my way!

Miles 1-3 I was going about 15-20 seconds too fast (my goal pace was 8:40). There was a podcast episode I was planning on listening to starting at about mile 6, but I decided to start it early, hoping it would help me slow down. It didn’t quite work though, and I kept running 10-15 seconds too fast. (The Office Ladies podcast in case you were wondering-I’ve listened to all the episodes and am really enjoying them!)

I brought four My Spring Energy gels (after lots of experimenting with what to eat during a marathon, My Spring Energy are now the only gels I use) the first which I took at mile 6. I drank from my hydration vest every two miles, trying to keep it similar an actual race. At about mile 11 I started running in a town I used to live in back in 2015. Back then I ran on the same trail but was only running about 3 miles. It brought back memories running on it again and thinking about how far I’ve come-literally and figuratively!

At some point before reaching halfway the podcast ended. I put on an Audible book, but it was too intense to listen to in that moment so I just turned it off.

Miles 13 and 14 were 10-15 seconds slow, but I wasn’t too worried considering all the miles prior were fast. The next few miles were right on target and I was still feeling good. At mile 18 I started to slow a bit again, but I had my pace bracelet and I was still on pace. However, as the miles ticked by, I started to get slower and slower. I wasn’t yet tempted to walk, but I was having a hard time sticking to 8:40. I pulled out some go to running mantras which helped keep me moving at around a 9:00 pace.

By mile 23 I was fading fast. This is where actual races help, because the last few miles have the most spectators and their cheers really do boost you. Having no one around me made it harder to continue on. I reminded myself that reaching my goal finish time still means a lot, whether it’s an official time or not. Mile 24 was my slowest (I even caved and walked some), and it clocked in at 9:30. Having a consecutive miles at 9 minutes or slower started to make me worry I wasn’t going to reach my goal of a sub 3:50. I mustered up all my mental strength and tried to pick up the pace. I thought of positive words that would describe how it will feel when I reach my goal to keep me motivated.

As always, those last 2 miles felt like foreeeever. I am proud to say I finished mile 25 in 8:41! By then, I knew I was going to reach my goal! I slowed down a tad and finished mile 25 in 8:50. Originally, I was going to run more like 26.3, since every marathon you always run longer than the standard distance (find out why is every marathon is longer than 26.2!). But that last .20 I was really pushing it. Once I hit 26.2 I tried to convince myself to keep going, but quickly decided that there was no need to go further than the official distance. I ended on 26.21, in 3:48:18 (averaging an 8:43 pace)! So even if I did run a bit further, I still would have achieved my sub 3:50 goal!

This ‘course’ was very flat, with an elevation gain of 652, and an elevation loss of 587. It didn’t have as many up hills, but there also were no steep downhills to help push me along. Although I think the lack of downhill helped my quads to be less sore. According to my Garmin when I ran the race last year, Tucson has an elevation gain of 502 and a crazy descent of 2,293!

As I said above, training went amazing for this race. In November I ran 200 miles and felt great! I didn’t even need to ice my ankles like I usually do. After the 20 and 22 miler I felt great, tired of course, but not quite as depleted as I usually do after those runs. I of course used my Foot Chair insoles on every long run as well as the ‘race’, along with the ankle compression sleeve-both of which help with my accessory navicular syndrome. And I have never had an issue with blisters, read about these blister prevention methods for runners!

My marathon was of course hard and exhausting, but the rest of the day I wasn’t hobbling around with low energy like I usually am post marathon. I felt like I bounced back really quick, which took me by surprise. I think it’s partly because the course was so flat, and maybe I just did a good job with nutrition. I even did a 3 day carb depletion before starting the carbo load which I have never done before.

Running the marathon distance on your own is nothing quite like running an official race. It was still a cool experience though and I am glad that I didn’t decide to skip it altogether. Plus, now I know without a doubt I am capable of getting an official sub 3:50, if not a 3:45 when I run a spring marathon! (I’m registered for the LA marathon!) This was also special because the last time I completed this distance was in June at RnR San Diego marathon, where I hurt my IT band halfway through and had to limp the rest of the way (I should have just DNFed, but I was too prideful and wanted to finish). It felt amazing to successfully cover the distance again!

Am I making too big a deal of having a medal…?

After deciding I was still going to run 26.2 even with not going to Tucson, I still felt bummed about not having a medal to show for it. I know I know, who cares about a medal?? It’s just being able to run the distance that matters right?? Well as I’m sure other runners know, something about having that medal as physical proof of all the work you put into being able to run over 26 miles just feels so good!

I had read about some races having a virtual race option, where if you run the distance where you live, they still count it and send you a medal. I decided to email the Tucson Marathon and let them know about my predicament. I told them that I was still going to cover the distance and asked if I could still receive a medal for doing so. They replied and said they would! They were so friendly and accommodating, it makes me want to run the race again in the future! Here’s their race link in case you are interested into looking into the race! (Also side note, the race director Pam Reed has won the Badwater 135 twice!)

And of course I indulged in some favorite post race snacks!

After an evening or two of eating sugar I actually get sweeted out and am happy to return to my healthier diet. If you want to learn more about how I was able to start eating healthier and changing my mindset when it comes to food, check out my post on how to enjoy healthy eating! Along those lines, also feel free to read my post on how to stick to your New Year’s Resolutions!