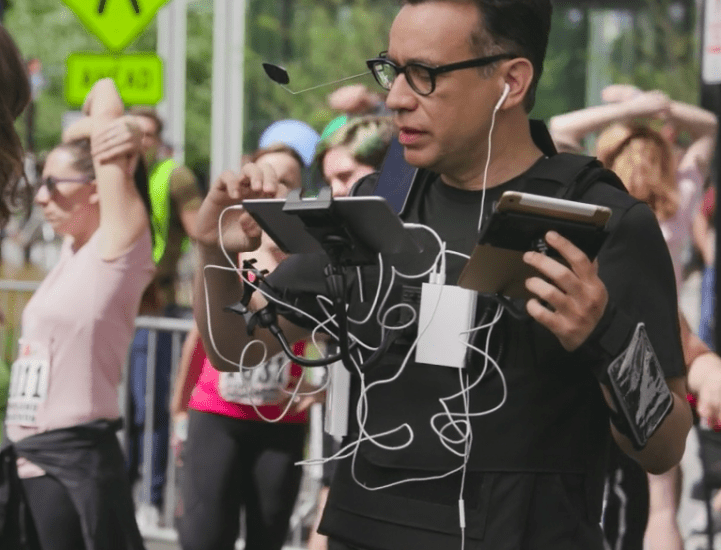 Yes, running is very simple and there isn’t much that is needed. If you are running long distance however, you begin needing more items. Honestly though, nothing on this list is anything you have to have. But having them can certainly help.

If you are looking to cut costs, then check out my post about how to find cheap running shoes and other products for those on a budget. Also, if you are new to running, check out my post on how to start running! Now without further ado-here are my favorite gadgets and accessories for running!

When I started running back in 2013 I just used a cheap digital watch. I would run for a certain amount of time, but never really knew what my pace was or even how far I ran. I still was able to (kind of) train for a trail half and ran it successfully (check out my Golden Gate Trail Half review). So if you are wanting to run a race, even a full marathon, you could do it without a fancy watch. But honestly having the fancy watch makes such a difference!

Anyway, in mid 2016 I got a Fitbit Blaze and really liked it. I didn’t even use the running feature until the summer of 2017. At first I just used it to track how long I ran. The Blaze isn’t a GPS watch, so it didn’t tell me my pace or the distance I covered. One day I brought my phone with me, because the watch was connected to the phone, it used the phone GPS and it was able to track me and tell me my pace. It was so cool! After realized that I started bring my phone with me on every run.

In the beginning of November 2017 I bought the Garmin Fenix 5s. This one is a GPS watch, so even without your phone, it can track where you run. It gives you sooo many stats about your running and just has so many features it’s crazy. I don’t even utilize all it has to offer. I love it though. There are some things I like better about Fitbit though. For example the screen on the Blaze and Ionic are way brighter and more colorful and more high tech looking. I also like that the app is a white background whereas the Garmin app is black. 99% of runners seem to wear Garmin though, so there must be a reason… I’m tempted to get a GPS Fitbit, but I would wait till the Fenix 5s dies or I sell it or something. It was too expensive to just kick it to the curb already! And I really do love it.

A GPS running watch has totally changed my running. I would definitely recommend one to anyone training for a distance race, it makes such a huge impact of your training!

When AirPods came out I thought they could only connect to iPhones. Then while reading a review about the Google Bluetooth headphones, the person said to just go with AirPods. When I realized that I went ahead and got myself a pair. They stay in my ears great, I’ve worn them while running, while on the stationary bike and I’ve worn them while talking to someone on the phone. The only issue I’ve had is them cutting in and out. That would happen in Santa Monica when I walked around the train/light rail station and once at the gym. It seems to happen when there’s other frequencies interrupting it or something. But yeah, overall they have been awesome! They have a great battery life too!

I must admit I also have a pair of old school ear buds called Yurbuds Inspire 100 that I love and still use on occasion. They stay in my ears great and are sweat proof! They obviously cost a fraction of the cost of AirPods, so it’s just kind of nice to use head phones that are cheap and you don’t care if something happens to them, you know? With a great price tag, comes great responsibility!

I heard about Koala Clip on Instagram and decided to give it a go. It only works for girls, because it clip it to the back on your sports bra. It’s sweat resistant and can fit your phone as well as a few other small items you may want to stash back there (keys, cards, and things of the like). At first it seemed to make my bra straps dig into my shoulders more, but overtime I must have just gotten used to it because it doesn’t bother me anymore!

This is another I heard about through Instagram. You step in and out of the Flipbelt and it fits snuggly around your hips. I have worn one for each of my marathons and it works great! It has a key clip thing you can attach you keys to which is a nice touch. My phone fits nicely, as well as my running gels! They also have flat water bottles you can carry inside them. I used to have the small one and and used that when training for the SF marathon last year. I really have no complaints about these!

Yes, once again, I heard about this through Facebook. Road ID is great in case you are in an accident and are unconscious. It has your emergency contact info so whoever finds you will know who to call. Hopefully it will never have to be used, but it’s a good idea to have it with you. I never even notice it while running. (Check out this post with other safety products for runners.) Side note-they also make these for kids in case they get lost! Great idea especially when you are going to theme parks and other such places where kids can easily get lost.

In one of my earlier posts, I shared what I found to the best hydration pack for running, which is the Osprey Duro 1.5! If you are going on a long run and there are fountains along the route, then bring a water bottle, or hydration vest wouldn’t be necessary (although I would recommend salt tabs in order to prevent dehydration). If the running routes has few, or no fountains, then a hydration vest is basically a must. This one is great because is is comfy, has lots of pockets, and doesn’t chafe!

Goodr Sunglasses are popular among runners-and for good reason! They are cheaper than others, and they are lightweight and comfy. Not only are they great for the sunny days, they also great for colder weather. When running in the winter in Utah, there were times when it was so cold my eyes would be super watery. Wearing glasses helped with the cold wind and stopped my eyes from watering too much.

Running gels aren’t a gadget or accessory, but if you are curious about what to eat during a marathon, check out my post about it! Find more run gear on my post about what makes great gifts for runners!

What are some of your favorite running accessories? Do you like Fitbit or Garmin better?