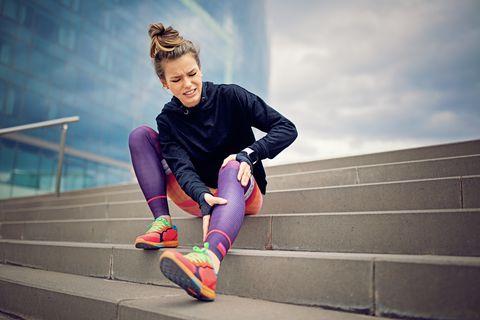 To be honest I’ve had a hard time with this injury this past month. Actually that’s not true, the week post injury I didn’t mind because for the first week after a marathon I don’t run anyway. Into the second week I was a bit disappointed I still couldn’t run. But I started biking while watching Netflix, which I didn’t mind. The third week, I started to feel annoyed with myself for not dropping out of the San Diego Marathon. Or wishing I had signed up for the SD half. So I guess that’s when I began to have a hard time with it.

I also started to be frustrated that not being able to run was making me so bent out of shape. Like, come on, there’s more to me than just being a runner. Running isn’t the only thing that makes me happy. Yet I still struggled to feel positive. During the third week I was able to run three miles, with just a couple walking breaks. Then in the fourth week, on a Thursday I started to have worse pain in my leg. After thinking it was getting steadily better, suddenly it seemed recovery had taken a step back.

The following days I was still able to get myself to ride the bike and still go to the gym. However the following Monday, I just had no interest in doing the bike. Or going to the gym. Or even getting dressed in workout clothes. So I stayed home, ordered pancakes and a cinnamon roll. While Scott went to workout, I proceeded to enjoy my sugary carbs while watching a chick-flick. Part of me regretted not going to the gym, but you know what? I actually think it’s okay. Literally every day I am up by a certain time and am dressed and ready to go. Even on Sunday’s. So I don’t see anything wrong with taking a morning off.

The rest of this week I ran 3 miles every other day. I think next week I will do the same basically, but rather than run by distance, I’m just going to run for 30 minutes and not even have my Garmin on. It’ll be nice to run without seeing or caring what my pace is. Here’s hoping next week will go well and I will be able to run the half at the end of this month!

While dealing with this second running injury, here are some thoughts I’ve had on what helps to not loose fitness and to stay positive!

Be upset, but don’t wallow

I’ve been upset in spurts. I’ll have a few days where I’m feeling at peace about it. Then a day will come along where I feel miserable about not running. Unfortunately, like most things in life, this is a lesson that needs to be relearned and reapplied. It’s okay to feel upset, but if you wallow in self-pity then you are going to make things worse for yourself. Allow yourself to feel those negative emotions, but also work on getting yourself to a better place emotionally and mentally. And keep doing it, again and again.

One way to help be positive is to read motivational books. Everyone has dealt with setbacks and injuries, reading about others overcoming it will help inspire you.

Figure out and resolve whatever started the problem

I have different running shoes, some with the Foot Chair Insole, and some without. The run I did where it started to feel worse again, I wore shoes without the insole. So I’m wondering if wearing shoes that don’t give me the support I need due to having Accessory Navicular Syndrome, is causing me to have IT band pain? I think there’s a connection there.

I also am avoiding running downhill, at least steep or long downhills. I am wearing shoes with the Foot Chair insole here on out as well as compression ankle sleeves. I bought the strap that goes around your thigh to help with ITB, as well as a compression knee sleeve. Both of these also seem to be helping.

As hard as it may be, adjust your race goals

I’m signed up for the San Francisco Half Marathon, so I have the rest of July to prepare. If it comes down to it, I may opt to walk the 5k. That would honestly be so upsetting if it comes down to that though. I’m running the half with my brothers, who have never ran one before. We aren’t going for a fast time, just to finish. So I am praying that I will be able to run a 9 or 10 miler before race day and be able to finish the half injury free.

I’m also signed up for a 50k the end of September. If this month goes well, I should still be able to do it, so I’m not counting that one out yet. However, if I am unable to run that far by September, I’m going to sign up for a winter or spring race.

Adjusting goals is one of the hardest parts for me. I get so excited about the races I’m signed up for and the goals attached to said races. But being flexible with your schedule and with your race calendar is so important when you get injured. Don’t make the injury worse by forcing it. When I got injured while training for my first marathon, I had to remind myself that I was still on the path to running a marathon. Getting injured didn’t kill that dream, it just delayed it a bit.

Apply your determination to other forms of exercise

When injured, it can be hard to be on social media. Seeing other runners posting their mileage, or sharing quotes like “keep showing up”. I want to keep showing up! But my leg won’t let me! But I realized that thinking of all these things in relation to just running was limiting myself. “Just keep showing up” also applies to keeping with your recovery and cross training. I can’t run right now, but I can do yoga and ride the bike, I can do strength work and take walks. No need to throw a pity party and ruin your progress. So yes, keep showing up, even if it doesn’t mean running.

One thing I miss when I have to take a break from running is being able to eat more! I don’t pig out on junk food, I’m just taking in more calories from mostly healthy, nutrient dense foods. Even if I’m doing cardio on the bike for an hour or two a day, it just doesn’t give me the appetite that marathon training does. When injured I cut back on how much I eat, and since I am burning less calories I also try to make sure my diet is even cleaner-a healthy diet also help speed up muscle recovery. Although, in the beginning I talked about eating a cinnamon roll, so I haven’t been perfect in this regard.

It’s important to keep in mind that all athletes go through injury. You aren’t alone in feeling depressed, defeated, like part of you has been taken away. We also know what it feels like to express your disappointment to someone, only to have them say, “it could be worse”. All we’re asking for is a little validation! Now you’ll know what to say to people when situations are reversed. Yes, someone may be going through something, but to you it doesn’t seem like a big deal. But to them it is! So rather than say, “at least you have (insert whatever you ‘should’ be grateful for)”, validate their frustrated feelings!

Focus on other things that make you ‘you’

Use the down time to strengthen other parts of your body and reconnect with other hobbies you enjoy. Marathon training takes up a lot of time. Now that you aren’t running and therefore have more time-focus on the things that maybe got neglected due to all the running.

Going through an injury is tough. Filled with worries and regrets, while trying to have a good attitude about it all. Not to sound dramatic, but if I had an injury that prevented me from running long distance ever again, I would be devastated. When unable to run for months at a time is already hard enough. Having to start up slow is also a humbling experience. But it also makes me appreciate running all the more. I’m at a point, where once I am able to consistently run 3 milers an be fine-I will be so relieved! Just a couple months ago running 3 miles felt like nothing!

I also know that the next marathon (or that September 50k) I run, I will feel all the more grateful to be able to be out there doing what I love!

What’s the longest you’ve been down from an injury? How did you cope with being injured?