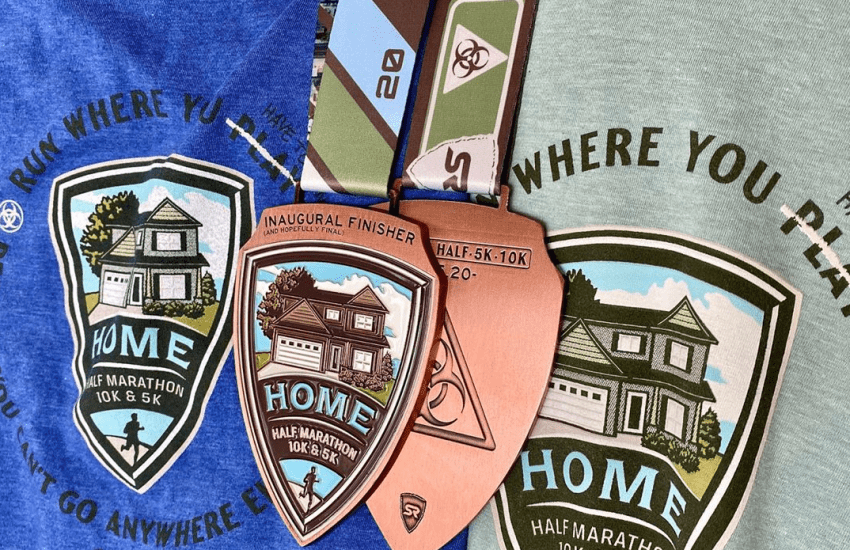 Before every spring race got canceled, I had planned on running a couple half marathons before running a full in the summer (hopefully that won’t be canceled!). I actually was thinking of running one earlier this year, but it was a few hours’ drive away and I didn’t feel like making the trip. Now that all the other actual races got canceled, I’m regretting not having gone!

As all fellow runners have noticed, there have been so many virtual races that have grown in popularity ever since social distancing was enforced. There have also been actual races that had to post-pone and/or have the virtual option.

One virtual race that stuck out to me was the Stay at Home Half. I loved that is had a theme that applied to our current situation and the date they scheduled the ‘race’ fit in perfectly with my training plan.

I made a route that had a lot of downhill (though most of it was int he beginning), in order to increase my chances of a PR. There was about a mile that had lots of stop lights, but I just hoped that come race day I would get lucky and hit a lot of green lights while running. I had my husband drop me off at the start, and then had him meet me at the finish an hour and 40ish minutes later.

Training went really well. I am currently working on a goal of running my highest mileage week ever, while also marathon training. The half marathon took place about 3 weeks before my peak week, and 7 weeks before my planned full. I wanted to run a 1:44, breaking my 1:46 PR (from my first half marathon last October). My race pace workouts and speed sessions went great and helped me to feel very confident leading up to the race.

The week before race week I ran 60 miles, so I went into race week feeling physically tired, but I did do a mini taper to help me feel fresh on race day. I had some tightness in my right thigh, which worried me. However it had no issues on race day so that was wonderful.

The day before the race, and the morning of I started to get nervous and felt I didn’t have it in me to finish in my goal time. But I just told myself that my pace doesn’t matter. All that matters is that I give it my best. Reminding myself of that helped take the pressure off and helped me feel better.

Also, random side note. I bought this sport bra a couple weeks ago and I love it! The straps don’t dig into your shoulders, no chafing, keeps you secure and is surprisingly comfy! I wore it for this race and it was great. I’ve bought a few other things by CW-X and they’re always great! Definitely going to be buying a second sports bra from them.

The start of the race was a 3 minute drive from our house. I drank a pickle juice shot (my latest pre-race tradition) and got in the car. Scott dropped me off at the top of the hill we live on, and off I went! The first mile had some small rolling hills, but the second mile was a pretty steep downhill. My first mile was my slowest, coming in at 8:14, 14 seconds slower than my goal pace. But thanks to the downhill in mile 2, I clocked a 7:44 (my fastest mile during the race) and made up the difference.

The next few miles were more of a gradual downhill. I drank nuun about every two miles (I had this water bottle which I love, it slides in perfectly into my flipbelt). At the start of the run I felt nervous about achieving my goal, but I reminded myself that the time didn’t matter, all that mattered was that I gave it my all.

Once I was a few miles in, and going at a great pace, I told myself that now my body was just on autopilot. Telling myself this running mantra helped take the pressure off of focusing so hard on staying on pace. And it’s also the truth, once you’ve been running a certain pace for a bit, your body really does have that pace locked in and is just continuing to do what its been doing. Mantras are a lifesaver when running, check out this post for my favorite running mantras.

Around mile 6 is when I got to the area that had a few stop lights, but I got lucky and only once had to stop and wait for one! Then mile 7 came and I had one of my My Spring Energy gels. I was still feeling good, and was now over halfway there! I was also over 30 seconds above target! (I made myself a pace bracelet-something I highly recommend-and kept track every 3 miles to make sure I was on pace).

A little after mile 8 there was a hill, but thankfully I was ahead of schedule so even if the hill slowed me down, I would still be in good shape. The hill however didn’t even slow me down! Each mile was coming in under 8 minutes, I even had to consciously slow myself down at times because I would start running a 7:30ish pace. With over 4 miles to go, I wasn’t in the clear to start pushing it yet.

At 8.70 miles I reached the bike path were I would run the remaining 4ish miles. The first two went good, though by mile 10 I was starting to feel the fatigue set in. When I turned around at mile 11 to do the final two miles, there was a strong wind coming at me, thankfully for the majority of my run it had been at my back. Those last two miles were a struggle though. At this point I knew I could slow down to like 9 minute miles and still reach my goal of a sub 1:45, but now I wanted to get an even faster time. Mile 12 was 8:00 exactly, and mile 13 I really forced myself to pick up the pace. I started dreaming of hitting a 1:42, but I was tired and that wind just kept pushing against me. My last mile ended up coming in at 7:56, followed by the last .10, giving me a finish time of 1:43:22. I would have loved to get a 1:42 of course, but I am so proud of getting a 1:43! So no complaints here!

Scott was waiting for me at the finish and put a medal around my neck to really make it feel official. Like I said above, I ran this for the Stay at Home Half, and wanted to use that medal, but I found out they don’t send the medals till next month. So I had him use the medal I got for running the runDisney Virtual Star Wards Half 2 months ago. (I didn’t do a race recap for that, because I didn’t race that half, just did the 13.1 as a training run).

I think my favorite think about running halfs is that it’s short enough that I can actually reach my goal time! Marathons are just so long and draining and I always hit a point where I don’t care about my time and just want to finish. I need to find a way to keep that desire to hit my goal throughout the whole 26.2. With 13.1 I am able to keep that motivation the whole time. And those last couple miles are still hard, but I have enough energy to really push it still.

I really enjoyed this virtual half and am excited to run an official half in a few months and make that sub 1:45 official! Or maybe by then I’ll be able to turn it into a sub 1:40!

What virtual races have you ran so far??