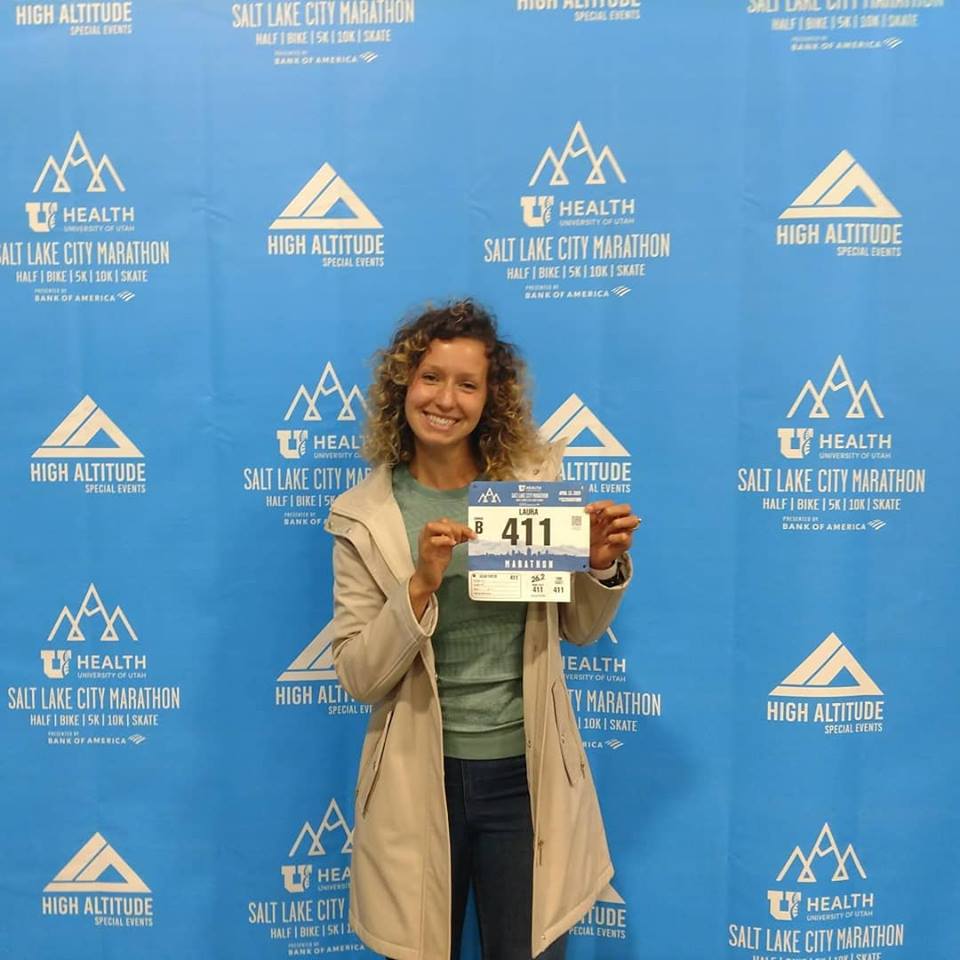 The night before the race I didn’t sleep the greatest. My alarm was set for 4:30am, but I woke up at 3:30am and couldn’t go back to sleep. I laid in bed for an hour and got up a little before my alarm. I got dressed, did some hip mobility/strengthening, ate breakfast and had some tea and water.

The logistics for this race made getting to the start line a breeze. We stayed at the Marriott Hotel downtown (the host hotel) and from there it was a ten minute walk to the trax station which takes you up to the start. The hotel is also super close to the finish.

I got to the start line at 6am, earlier than I wanted but it turned out fine. It was chilly at the start, at 3am that morning (plus the days leading up to the race) it had snowed. It didn’t stick to the road, but the grass and trees had snow. I hung out at the start and did stretching and read some motivation quotes on my phone. I used the bathroom three times (never had to wait in a line for them). At 6:45 I went to stand closer to the front. As time got closer I tossed my sweats over the side. I saw the 3:45 pacer, but he went out the start like a bullet. I was running at an 8:00 pace, so who knows what he was doing. I was disappointed that my pacer plan wasn’t going to happen, but I quickly got over it. At the start everyone is going fast, but I tried to reel myself back in. We started with the half marathoners too, so I didn’t want to go too fast just because they were going fast.

The first 5 miles of the race were great-very scenic and nice fast downhill. In memory grove there were three guys playing horns, one of which was a tuba! Overall the spectators of this race were wonderful! There were a few other places had people hanging out playing instruments later on the course as well. There were a number of spots that had people outside their homes with their own ‘aid stations’ which was nice. And one of my favorite signs was ‘Pain is just French for bread’.

Anyway, so the first five miles went fast. We then ran through some of the downtown area, there started to be a few small hills. At mile 9 we separated from the half marathoners and the full made its way into Sugarhouse Park. This was probably my favorite part of the course. I was feeling awesome and super positive and the park is beautiful.

We left the park and began approaching the halfway point. I saw my first half was slower than planned, but I figured that was probably a good thing and I could make up for it in the second half. After hitting mile 13, I turned a corner and to my left I heard someone say my name. I looked over and there was my sister and her daughter! It was a great surprise, I smiled and waved and kept going. I wish I would have given them a high five or something, but in the moment I didn’t even think to. Seeing them gave me a nice boost though.

Miles 14-19 weren’t that memorable or scenic. My pace was slower than I wanted. I tried to speed up on the downhills, but around 19 going fast even downhill wasn’t feeling easy. I start to feel extra tired, but I told myself I had only two more miles till my final gel. At mile 21 I took my gel and repeated positive words and mantras to keep me going. I knew that we would hit Liberty Park around mile 24 so I started just focusing on getting to Liberty Park. Once there though, things weren’t getting any easier. I ran the course long, so at mile 24, I still had 2.7 miles left. My pace slowed but I felt like I was giving it my best. My right calf was tight, and just both legs in general not feeling the greatest. That last mile and half I couldn’t help but make grunting/yelping noises I was just so tired. I even felt like crying because I just wanted it to be over. Finally, I was approaching the 26 mile marker. Spectators near the end were awesome, telling me the finishing line was in sight once I turned the corner. Finally, I turned and saw it. I tried to pick up the pace, but I was still going slow. As I was approaching the finish line I heard my name and turned to see my husband and mom. I was so focused just on finishing that I don’t know if I acknowledged them. Once I crossed the line in 3:58 I was in the usual post marathon daze. I got a medal, someone handed me a water, then thankfully someone else gave me an electrolyte water. The finish line festival was okay, not as much going on as I thought. We ended up walking to a nearby restaurant and hanging out there rather than staying at the finish for long.

Overall, I think this race was really well organized and it’s a cool course. The hills honestly didn’t bother me, I think I did a good job preparing for them (physically and mentally). Part of me doesn’t get why I finished in such a slow time (relatively speaking), but it must have been due to the race being at 4500-5000 feet elevation and I trained at sea level. I’m proud of my effort and glad I got a sub 4. I would do this race again, not next year, but sometime down the road.