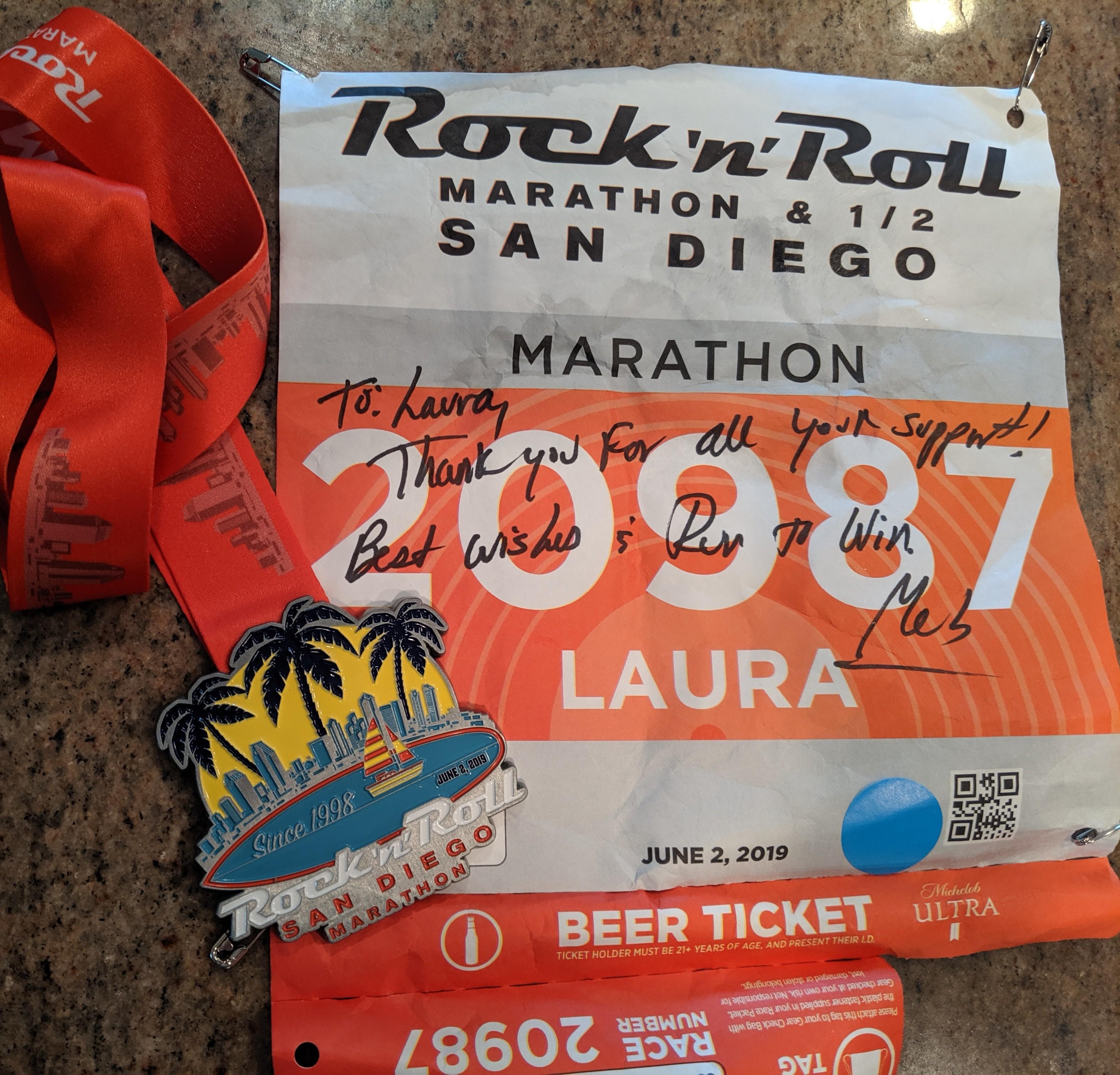 Just to get it out of the way-this race did NOT go the way I intended. I ended up finished 50 minutes slower than my anticipated finishing time. A nice slice of humble pie as I clocked a couple 13 minute miles near the end. Having said that, I actually had a really great experience running my first Rock’n’Roll race!

The expo was pretty cool, lots of companies there promoting their food and gadgets. The had lots of cool backdrops for picture taking, but I didn’t take any. It was incredibly organized, so even though there were over 20k runners it was easy getting the bib and such. A big plus was that Meb Keflezighi was there, so that was awesome! I have his inspiring running books on kindle, so since he couldn’t sign those I had him sign my bib!

Race morning, I got up at 3:45. Drank some Mudwatr, then ate the breakfast of champions- oatmeal with almond butter and banana. I did some of the banded hip walks, to activate the glutes and hips. I waited till race morning to decide what shirt to wear-I was trying to choose between three different ones. I went with the bright colorful one. That top is actually made from Merino Wool! I didn’t have a single problem with it during the race-comfy, sweat wicking (and I sweat a lot, should have seen how much salt I had on me), no chafing and it’s a unique design!

I got done with my morning prep and headed over to the shuttle which was a few blocks away. I go to the bus at like 5:15am. We reached the start at about 5:30. While on the bus I put my headphones in and listened to church music. It really helped me focus on all that I have to be grateful for.

Upon getting off the bus I went straight to the long port-a-potty line. After I went to bathroom I stood back in line again haha. By the time I had used the bathroom twice it was 6am-15 minutes till the start.

I was assigned corral 5, when I saw that I was worried that might be far back. Little did I know, there were 28 corrals! So, five was plenty close. I brought a throw away hoodie and tossed it once I was in the corral. A lot of people didn’t even wear sweaters to the start though because the weather was pretty nice, cool but not cold. For once I was so happy for June Gloom! It was cloudy for 99% of the race!

The race started on time, and I ended up crossing the start line shortly after the official start. I did a good job sticking on pace. I wrote paces on a paper bracelet, and at 3 miles I was right on track. The whole course was rolling hills, which I actually don’t mind. There were a couple steeper hills, but the steep ones never lasted long. The aid stations were also really well stocked and organized. The volunteers were awesome. My name was printed on my bib, and the aid stations volunteers would often cheer for me by name! This race also had great spectators, some of them also cheering for me by name. There were a number of stages set up throughout the course with live bands which was also cool.

At maybe mile 5, there was a sign set up to honor fallen soldiers. For about a mile, they had small A frames on either side of the course with pictures and names of those that had died while serving. Once the pictures were done, there was like a half mile of people standing on either side holding American flags. The first dozen or so were active military, and after that it was volunteers holding the flags. I started tearing up at the part.

At mile 6 I started feeling pain in my IT band (the outside of the knee), but I still kept pushing along, hitting my target pace (which was an 8:40 by the way). Earlier we had entered an out and back that had lasted a few miles, then at mile 8 or 9 we were headed back and passed those going in. That was a nice confidence boost, to pass so many people that were behind me.

Around that time there were also some cheerleaders (looked like junior high age) and I smiled and waved. They went crazy and cheered even more when I acknowledged them. They were in a line and put there hands out and did the hand slap while running past them all, they made me feel like a rock star haha. I was feeling a pretty awesome runners high at this point. I’ve noticed that with all four marathons, around the 8-10 mile range is when I feel the biggest runners high.

When the pain set in

Unfortunately, around mile 11 was when I the IT band started to get worse. I tried telling myself it was all in my head and continued on. However, by mile 12 I brought my pace down, fearing an injury if I continued at goal pace. Mile 13 to the end just got slower and slower. Mile 24 was my longest mile ever-13:37.

Around mile 14 we entered another out and back around Mission Bay. As we were going in and passing those that were ahead of us I debated dropping out. I was also wishing I would have split off with the half marathoners. However I kept trudging along. At mile 18 we came back from the out and back, and once again passing those that were slower than me gave me another boost of confidence.

As we approached mile 20 I continued my walk/run routine. Another runner asked how I was doing. I said I was feeling pain in my IT band. He wished me the best and said I should save up energy because there was a hill coming up. He was also struggling, and the two of us leap frogged for the rest of the race. There were actually a number of people around me that seemed to be having pain-not just tired but having borderline injury pain. So even though it was tough to not be pushing myself like I wanted, it was nice to at least be in good company.

From mile 14 to the end there were so many runners that gave me encouraging words when they could see I was struggling. I got teary a few times, feeling thankful for such kind people.

Reviewers of the marathon talked about the section of the course on the dreaded highway 163. Because I wasn’t able to push myself, and the whole race was a struggle of running and walking, the highway didn’t seem that bad to me! Haha. Although the road was especially slanted (banked) on the highway. A lot of the course seemed to be slanted though, but the highway especially so.

As I ran and looked down at my running watch, it hurt seeing it say 3:50. My goal was to finish in 3:49. Then when my watch was over 4 hours it was hard, because up until today my slowest marathon was right at 4 hours. I got teary a number of times during this race. When seeing those times, I got teary because I was feeling sorry for myself. When that happened I tried to shift my focus to gratitude. One of the mantras I had going into the race was “run for those who can’t”, so the fact that I ended up struggling to run is kind of ironic. However, my ability to run wasn’t taken entirely, and I really did have so much to be grateful for. So those pity moments didn’t last too long.

We got off the highway around mile 25. Normally I would be pushing my hardest for that last mile-ish, but I seriously could only hobble jog. And I couldn’t even do that the whole time, I still had to take walking breaks even though I was so close to the finish. Once I approached the finish chute I made sure to jog and even smiled for the camera.

I’m normally in a marathon daze after finishing the race. With this one I didn’t get the chance to push myself physically or mentally really, so aside from my IT pain, I felt quite fresh. I actually like that drained feeling you get from giving a run your all, so I felt kind of sad about not getting to feel that.

I got my medal, a Gatorade and chocolate milk. The finishing cute was pretty long and led to waterfront park where the finish line festival was. I just squeezed through the fence though and met Scott on the other side, he was waiting for me with flowers. 🙂 I had texted him at about mile 14 letting him know I was going to be behind schedule and that I would just text him when I was about 20 minutes away (that’s how long it takes to walk to the finish from our apartment). So that worked out well. A good example of why you should bring your phone during longer races.

When we got back we went in the hot tub which felt sooo nice. Getting those jets all along my IT band area and feet felt so good! After that I got french toast and an omelette from Richard Walkers Pancake House.

Later in the day Scott told me how surprised he was at my positivity that day. After the race he expected me to feel pretty down about my finishing time (after the Salt Lake City race I initially was feeling upset about my time). He said how impressed he was that I stayed positive. Now don’t get me wrong, it still stings a little to see 4:40. However it was one of those times were something out of my control took place. Race morning started with me focusing on gratitude. Throughout the race I kept coming back to that and really feeling it-to the point of feeling teary at times.

I wanted my ‘heart goal’ (a term Ryan Hall uses) to be to run with a heart of gratitude. I had thought that gratitude would help me push and stay on pace when times got tough. Turns out it helped me to keep pushing despite my very slow pace; and helped me to be at peace with how the race turned out.

Overall, this race itself was awesome. It definitely makes me interested in running more races from the Rock’n’Roll series. The volunteers were the best, crowd support was great, the live music was cool, and the course itself was pretty enough (so far, SF marathon followed by SLC have been the most scenic races I’ve done). So often I felt special during this race-people using my name to cheer me on, and so many high fives. There were also a lot of photographers on the course too, plenty of chances to get that great race photo!

It has rolling hills throughout-which I forgot to mention, after the leg pain I wasn’t able to take advantage of the downhill because that seemed to make me leg hurt even more than the uphill!

The medals are smaller than the others I have, however they look really cool. The race shirt you get is the best from the race shirts I have received thus far. The expo was also exciting and fun. So yeah, even with the pain I had, it was still a fun experience!

Read here to learn how to recover after a marathon!

Have you ran a race from the RocknRoll series? Ever had an injury/actual pain that prevented you from reaching your goal time? Who has read books by Meb or Ryan Hall?