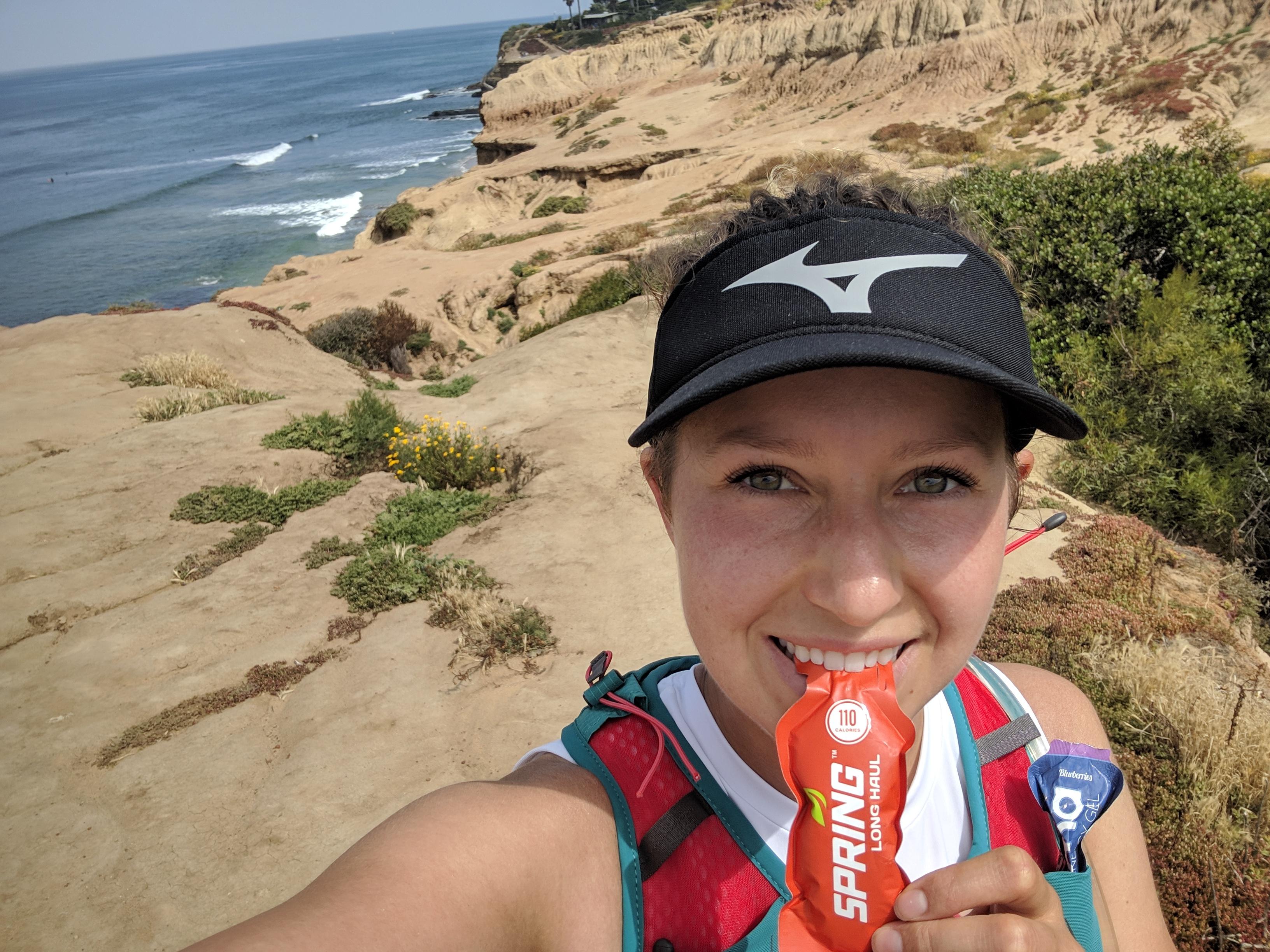 In summer of 2017, when I was running for 30 minutes at a time, I remember walking around REI. Seeing the hydration packs, fuel belts, running watches, salt tabs and running gels, I decided that one day I would run distances that would require all this extra gear. When I had my first long run that would require a gel, I felt pretty bad A eating that gel mid run.

When you get to the point where you need to worry more about hydration, what gels you should be using and what should you be eating in the morning, it can be overwhelming. Let me help you sort some of this out.

If your pace is 10:00 or within two minutes of that time you generally start bringing a gel with you once you start running 12 miles and more. If you are faster or slower than that, then your fueling would be different. Faster runners eat less gels, while slower runners would probably need more.

During training as well as race day, you eat a gel every 45 minutes to an hour, or every five miles (slower runners stick with the 45 minute marker rather than going by the 5 mile marker). During a marathon I usually go with about every five miles. Near the end though I sometimes take one again at mile 23 just get that extra umph.

Gels needs to be taken with water. If you are planning on using the hydration provided by the aid stations, look up the course map a few months ahead of time to see where the aid stations will be. Then plan out which aid station you will be taking a gel at. Aid stations are usually every other mile for most races, so it works well whatever your race day fueling plan may be.

The gel brands I have tried are My Spring Energy, Huma, Vega, Cliff, E-Gel, and Gu. There a LOT of gels out there, but those are the ones that I personally have tried.

I was drawn to My Spring Energy and Huma for the same reason other runners are-the natural whole food ingredients. Between the two, I prefer Spring, but Huma is pretty good too. I love the taste of Spring and the ingredients are so clean. I have never had any GI issues while using it. In order to get enough electrolytes while using it, I sometimes bring salt pills to take as well and will take one the same time I have a gel.

As far as the other brands-I haven’t used them in almost a year. So many unnatural ingredients, and myself and so many other runners have had stomach problems while taking them. So, for any new runners-stick with the natural ingredients!

If your race day plan is to drink the elecrolytes that are provided at the aid stations-make sure you look at the race website well in advance to check what product they are using. You can then use that same electrolyte on your long runs to ensure your body is okay with it.

When I ran the SF Marathon, I was using E-Gels, and only had water at the aid stations. However, SF was cloudy and cool that day so it was fine that I didn’t drink electrolytes. However, during the Tucson Marathon I was using Spring along with salt tabs, and again only drank the water. I became dehydrated and ‘hit the wall‘. It effected my performance. Basically, some races you may be able to get away with just having water, but better safe than sorry. After that experience, I will always drink the sports drinks offered (or bring my own hydration) when racing.

For the Tucson marathon I used salt pills by the brand Flow Core. They were pills you had to swallow whole and they were easy to take during the race. Considering I got dehydrated, I don’t think I took as many as I should have. For the SLC marathon I decided to try the Salt Stick brand I had heard so much about. I went with the chewable tablets, which I discovered was a mistake. The last hour, hour and a half of the race it felt gross chewing something so powdery. From here on out, if I use salt tablets-they will be the kind that you swallow whole.

About two hours before the start of the race, you want to eat a carb heavy meal. For most runners this means oatmeal of some kind. I like oatmeal with banana, nut butter, and cacao. The last race I did, I instead had two of the Superhero Muffins from Run Fast, Eat Slow, along with a banana.

Yay! You just finished your race! Time to pig out on whatever you want!!

I follow this line of thinking for the most part. The day of the race I usually am not that hungry. I have the post race banana, and usually some kind or protein bar that is offered. The actual meals I eat later that day though are usually pretty similar to what I would eat when training. As the case with I think a lot of distance runners, the hunger doesn’t set in till the next day. That’s when I pig out on any food I haven’t been eating during training. However, I don’t force myself to eat cake just because I now can. If you don’t feel like eating fries or what have you-then I don’t. No need to force it down just cause you feel like you deserve junk food as a reward. I really enjoy the taste of clean meats, fruits and most veggies, so that is what I stick to even after a race. But I also will enjoy some good brunch carbs and pastries, as well as cheesecake and donuts.

It’s important to put a limit on how long you allow yourself to eat whatever you want. If you’re not careful, you will end up just eating however and gaining too much weight while recovering from the race. Plus, junk food feeds inflammation, so you are just prolonging your recovery. It’s important to treat yo’ self, just makes sure you don’t let it last too long.

Hope this helps! Check out this post, where I talk about all you will need when preparing for race day!