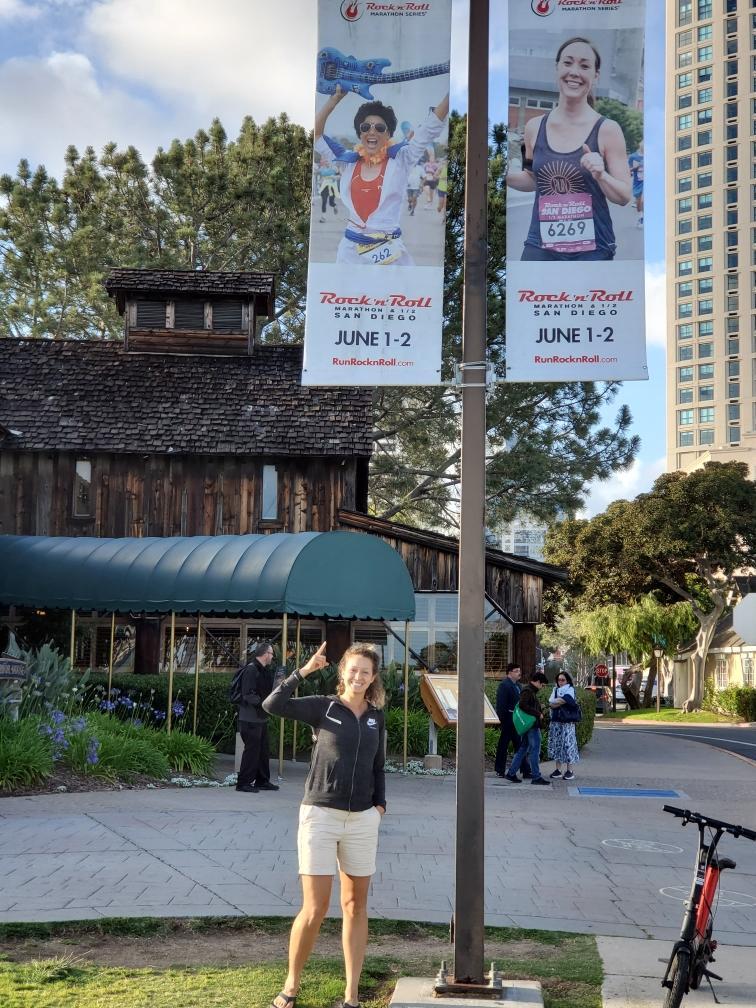 The Rock’n’Roll San Diego Marathon is in less than two weeks! I was short on time in regards to training, so rather than tapering for the usual three weeks, I am only tapering for two. Cutting it down to two has helped with the ‘taper crazies’ which is nice. I remember for my first marathon, after peak week I felt so tired and was grateful to be tapering. I also almost felt like I had lost motivation for the race itself. Like the peak week is what I had been working towards, and once that was done I was ready for a break! However I stuck with the training as prescribed, and come race day I was feeling awesome!

Peak week this time around was much less mileage than usual, so I definitely don’t feel like I’ve lost any of my fire for the marathon. Having this blog has also helped a lot while tapering. I’ve also been reading Run the Mile You’re In which I am loving! Having some good running books or movies lined up for the taper is always a great idea, regardless how long or short your taper is. I’ve also enjoyed reading some of these other running blogs as another way to keep me inspired!

I’m also trying to eat less carbohydrates this week, so that when I carb load next week my body will store it better. ‘Trying’ is the key word haha. I am in love with bagels and cream cheese! I really need to kick my eating into gear the last four days or so of this week though. That’s been another benefit of having a two week taper. Peak week I eat so much, then having to cut down as I taper can be hard. So this time around, this week is the only week where thats really been a worry.

Also, a side note about this upcoming marathon. This is the first time I’m running a marathon taking place in the city I currently live! I’m hoping that’ll give me a ‘home court advantage’ so to speak. 😉

The other day I officially decided on what races I’ll be doing for the remainder of the year. One of which will be a 50k! Last fall I decided I wanted to do an ultra this year (thanks to books by Scott Jurek and Dean Karnazes for inspiring me). I had wanted to do a 50 miler, but that didn’t end up happening. When that goal fell through, I figured I just wouldn’t be doing one. However there were some changes with races this summer-such as adding San Diego, then rather than doing the SF full, my brother and I are going to the half instead. I was initially disappointed, but I realized by switching to the half I could focus on my training for the fall. When I saw there was a 50k in September it just all fell into place!

I am curious how I could do in a road half. I did a 13.1 mile training run in 1:46 so I wonder how much lower I could get in an official race. For SF though I’m going to stick with my brothers and run at their pace. The only goal will be to have fun! My husband, mom, sister and future sister in law will be doing the SF 5k, it’ll be our first family ‘rununion’! And I couldn’t be more excited!

I’m also really excited to train for the 50k. I love running, not just the racing. Seeing those weekly and monthly miles add up is such a confidence boost! When training for SLC I peaked at 63 miles and it felt so amazing to be running that much!

I do my own training and base it off of the Hal Higdon training method. If I don’t qualify for Boston in the spring, I may hire a coach to help me. Even though qualifying for Boston is a goal of mine, I’ve realized that can’t be my goal going into a race. Running a certain time is kind of like having a number of pounds you want to lose by a certain date. You can do all you can, but there is too much out of your control that could happen preventing this goal. So instead I will start setting controllable goals.

In Run the Mile You’re In, Hall talks about how he switched from time goals to heart goals. I really like that and will apply that to my training and races. Of course I am going to give my all in hard workouts and on race day. It’s also important to go into a race realizing it will be hard, yet also having the confidence you can preform well. But having a time goal just makes you feel defeated if you do your best yet don’t reach it. After the Salt Lake City race I felt really down initially because I didn’t reach my goal. After having time to reflect, I felt at peace about it because I really did do my best. There were things that I couldn’t have helped (training at sea level, then racing at 5000 feet being a big one).

Some people qualify for Boston in their first marathon, others take ten years. It doesn’t make one better than the other, we are each different. I will keep doing my best, and I think setting goals unassociated with time, will end up helping me more in the long run.

I’m really excited about what the rest of this year has in store. Regardless of what times I get, I continue to make progress and that is what really matters. I love running and am enjoying the struggle as I make my way to success.

What races are you doing this year? Do you set yearly/monthly/weekly goals?