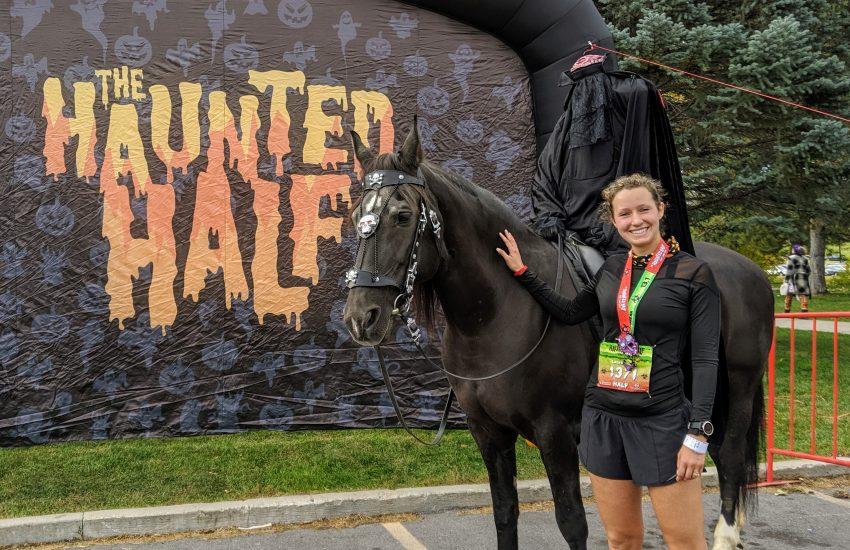 I ran The Haunted Half in Salt Lake City and finished in 1:46:54, averaging an 8:08 pace! I am thrilled with that time. The ‘Training’ segment I wrote a couple days before the race, and as you will read, I didn’t think I would be running very close to a 1:45-yet I was just less than two minutes away! This race went better than planned, and this is actually the first race where I achieved my goal! For the past marathons, I haven’t finished in my goal time (in my first marathon I was just one minute away from my goal of a sub 4). So I learned what it feels like to achieve your race goal, and I gotta say, it’s an awesome feeling!

Now onto the race recap and review!

The training cycle for this race went really well. It started slow, since I was coming back from the IT band injury. However, a few weeks after getting back to running, I realized I had enough time to be ready for a fall half! I have never ran a road half before (I did run a trail half in 2014, the Golden Gate Trail Race) and in March I did a 13.1 training run which I completed in 1:46. I make my own training plan, but I follow this free Hal Higdon training plan closely.

I originally wanted to break my unofficial half PR (personal record) and finish in 1:45. However, I realized that wasn’t a realistic goal based on how training was going. I was thrilled to be running again injury free, but I wasn’t in the shape I had been in when I ran the 1:46. I decided a sub 1:50 would still be an awesome time, and more achievable.

When searching for which race to sign up for, finding one with simple race day logistics is always important. And this one had very simple logistics! I live in a suburb of Salt Lake City, so getting to the bus loading area was easy. It was also easy for family and friends to get to the finish line area.

I got to the buses at 6:15am. I was on the second bus up to the start and we got there before 7am which meant over an hour and half of waiting in the cold before the start! At the Tucson Marathon they let you hang out in the buses for as long as you want, but here we had to get off. They had small fires set up, which helped. But after an hour the area was pretty smokey because of them. I was wearing sweats, a hoodie and the mylar blanket they had for us and I was COLD. The time went by pretty quick though. Scott bought me a pickle juice shot and I had that 5 minutes before the start. (I think I will make that a tradition now. Partly for good luck, but also as a little extra help to avoid hitting the wall in marathons).

They didn’t have corrals, so you just got in line where ever you wanted. They did have pacers, but I wrote out my paces based on running 8:10 minute miles so that I wouldn’t need a pacer. The race is kicked off with a headless horseman throwing his pumpkin head on the ground, but unless you were right up front and center, you couldn’t really see it see it.

The first three miles I was still so cold and my body was basically numb. At mile three I was finally getting feeling back. I had a lightweight ear warmer on, but at like mile 5 I brought it down so it was around my neck. Initially I was wishing I had worn leggings, but I warmed up nicely so I’m glad I went with shorts.

Anyway, the first few miles are all downhill, then you get a couple small hills and flat parts. I was doing great and was keeping with my pace bracelet. My watch started to clock the miles a bit before the race mile markers, but they were still pretty close together so I wasn’t worried about covering too much over the 13.1 distance. I took Powerade at each aid station-mile 3 and 7. At mile 7 is also when I took my only gel for the race (My Spring Energy of course).

During each marathon, I get the biggest marathon high at around mile 10, and this race was no different! What was different, was that when I was feeling that high around mile 8/9, I was thinking how crazy it is that I’m almost done! Usually around that time I still have 16 miles to go haha.

Around mile 8 you pass the Hogle Zoo and there is a bit of a hill around that time. I used to work at the zoo, and remember seeing the Haunted Half going on, so it was cool to be the one running this time. My paces were still right on. I would have a mile come in at 8:14ish, but then my next one would be 8:05ish, so it all rounded out.

At mile 9 you start running through the residental areas of Salt Lake. This last bit is mostly flat, some downhill but nothing as downhill as the first 7ish miles. At about mile 11.25 there was a gradual incline, which I resented. Around this time is when I realized I was going to achieve my goal without a doubt! I even thought how maybe I could even get a 1:45. I tried to pick up the pace, but I was already pushing myself.

At mile 12 I really tried to go all out. There was another hill, nothing crazy, but at mile 12 it felt tough. I didn’t hit the wall during the race, but I was struggling through mile 12 and feeling ready to cross the line.

The last quarter mile I started feeling like I was going to throw up (that’s a good sign right? show’s I was pushing myself?) but luckily I didn’t. I sprinted that last bit and saw my family and smiled. My husband took the below picture, I’m so proud of my form!

And I finished in 1:46! Going in to the race I had felt like a 1:45 was out of the question, and was even doubting I could do a 1:50. But I did it! Having it be cold in the first miles, plus the downhill was of course a big contributor to my success.

The medals were well done, but radioactive zombies aren’t really my thing. There was oranges, Domino’s pizza and Cliff bars, but like I said, I was feeling nauseous, so I just grabbed Powerade and water.

We got a picture with the headless horseman, my sisters kids went in the bounce house for a bit and then we went home!

It definitely wasn’t crowded so it’s easy for family and friends to see you finish and easy to find each other afterwards.

Race Review-the gist of it

I loved the course and would for sure run it again if we are here next year. It’s great for a PR, and it’s pretty. Course support is minimal but that didn’t bother me. Waiting at the start for over 1.5 hours in the cold sucked. That would be my only complaint. But they can’t control the weather so it’s not their fault. Although it would be nice if they let us hang out in the bus rather than having to get out right away.

The expo was nice, quick and easy. Logistics are easy. The Halloween theme is fun and a lot of people were in costume which was entertaining. I don’t like the medal, but they’ve had really cool medals in the past. If I run next year I’m sure it will be a medal I like better. The finish had a number of things going on to keep family and kids entertained and lost of areas for runner photo ops. So the gist of it-I loved it and will most likely run it next year!

Quick side note-for those interested in accessory navicular syndrome. I ran in the Brooks Glycerin 17 with this insole along with a compression ankle sleeve under the sock and my feet felt great!

So after writing this I was looking at the results on the site, and it says I ran a 1:47:16 :/ The only reason why I think it must be off (because I pressed start as I crossed over the start line) was because when I was right by the start I realized I had dropped one glove (I had taken it off to take a picture). I didn’t want one hand to get cold, so I turned around to find where I dropped it. Since I was right by the start, had it already started tracking me…? It may seem trivial, but I was disappointed when I saw the official time wasn’t a 1:46. Oh well. Next half I run I’ll get a sub 1:40 and won’t even care whether it was a 1:46 or a 1:47 for this race.