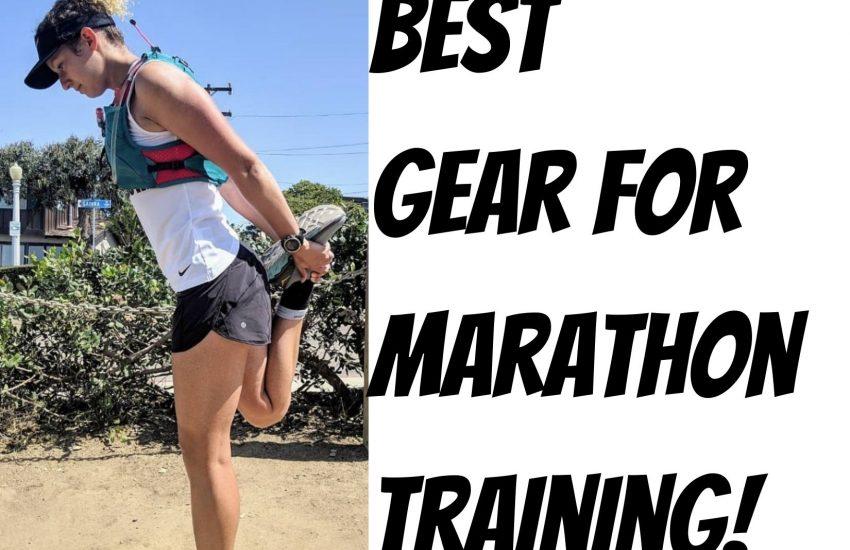 I have now been marathon training for four years. Compared to some, this might not seem like long, but it’s long enough to have found the best products which last the longest and are well worth the money! Some of these items may seem pricey, but they are products I have been using for the last four years and they are still going strong!

First on the list is this amazing hydration pack. I tried a few in the beginning, and this one was the best. Years later, it is still working great! I did buy a new bladder, but it was because my other one was stained orange from the Gatorade, I had put in it. This new one I am going to try and stick to the clearer liquids.

This pack has so many pockets, fits 1.5 liter of fluids, and doesn’t bounce around when you run. There have been times it has chafed the top of my shoulders when I have worn a tank top, yet other times I wear a tank top and it’s fine, so not quite sure what’s going on there. Aside from that weird fluke, it doesn’t chafe at all. I wear this on all long runs, and I don’t see myself ever switching packs!

All chafe creams are not made equal! Glide is one you hear about a lot, yet I didn’t like it at all. I started using this Gold Bond brand as well as this tea tree oil anti-chafe (great if you have sensitive skin like I do) and they are great! The only downside to the tea tree oil one is it isn’t a stick, you have to put it on your hands, then rub it where you want it. A few years ago, I had areas that chafed, and then turned into a rash. I started using the tea tree one and it not only stopped the chafing, it helped clear the rash!

I chose shorts over leggings whenever I can. When winter is approaching, I really push it and wear shorts until I really don’t have a choice. Even when I was just doing three mile runs, I wore the Lululemon shorts, specifically the Hotty Hot shorts and the Tracker shorts. Even when getting to the higher mileage I still love them!

In Texas, when I was doing long runs, I had to switch to the biker short style. I would just be so soaked from the sweat and humidity, wearing loose shorts was no good. I wore the Reebok shorts and they worked great! They are also a good price. I then wanted ones with pockets, so I bought the Brooks brand (there is the 7″ shorts and the 9″ shorts) and I love them even more than the Reebok ones! I haven’t been using these as long as the other products listen, but I have worn both of these brands for long runs, and they are great if you are running somewhere really humid! They are also nice because you don’t need to worry about your inner thighs chafing.

I wear a Flipbelt on every run (except long runs, because I can put everything I need in my hydration pack) and have worn it for each of the marathons I have run! It stays in place, doesn’t bounce, and can hold everything I need. When I am doing a run in like the 8-12 mile range, I will wear this and bring one of the Flipbelt water bottles which I love.

I decided for my next race (in less than two months!) I will wear the Brooks bike shorts. Because they have the back cell phone pocket, plus the two side pockets, I won’t need the Flip Belt. In most cases though, I always wear it and I love it! They also come in a wide variety of colors which is fun.

The lemon lime Nuun is by far my favorite. This is the electrolytes I drink throughout the day and is what I put in the water bottle for those medium long runs. Liquid IV is great for the hydration pack on long runs. It is basically clear, so it doesn’t stain, and the taste isn’t too strong. I don’t know about you, but at some point, during the long run, If I have a hydration that is too strong tasting, like Gatorade, I just can’t do it. Liquid IV though is a milder taste, while still providing the electrolytes I need.

I have tried so many run gels, but My Spring Energy is hands down the best. It is pretty pricey, but they taste great and have clean ingredients. (You can buy them here on Amazon but there’s more options when you buy from their website). I tried the Clif brand, and it gave my stomach issues. I tried GU and I didn’t like the consistency and it was just too processed. I tried Humana, which is a bit better than other brands as far as ingredients go, but they don’t taste the best. Honey stinger is another one I experimented with, but again it just didn’t work. I keep trying other brands, since Spring is expensive, but in the end, I just cough up the money because it is worth it. They have a newer flavor called Awesome Sauce (apple flavored) which is sooo good! I also love the Peanut Butter one called Long Haul (though I have been using that one for years now and I’m getting a little burnt out on it) and the Cranberry and Power Rush (banana and plum) ones are also really good. Two of their flavors I wouldn’t personally recommend are the Mcraecovery one and the elecrotide hydration and Speed Nut.

Having a GPS fitness watch makes such a difference! I used to have a Fitbit, but in 2017 I bought the Garmin Fenix 5S and I love it! I know Fitbit has improved since I had mine, but I am very happy with my Garmin. It makes tracking your distance a breeze, plus if you want to track your pace, this is a must have! A GPS watch is the most expensive thing on this list, but at the risk of sounding overdramatic, it has truly revolutionized my runs and I wouldn’t be the runner I am today without it! Also, I have had mine for four years and have had zero issues.

As you can see in the picture below, I am also wearing a pace bracelet (which I make by folding paper and taping it in packing tape) I highly recommend using one when racing! It’s such a big help to make sure you are on pace for you goal finish time.

I wear these ankle compression sleeves on any runs over ten miles. Sometimes, depending how my ankles and feet feel, I’ll wear them on shorter runs as well. And you better believe I have worn them for every race! I have had issues with my feet (such as having flat feet, accessory navicular syndrome and just sore ankles) so these have been a life saver.

I also wear these arch supports, though not as often when running. They mainly come in handy in wintertime when I have to wear shoes and I need more support while I’m out and about. In summer I wear supportive sandals, so they aren’t needed.

Speaking of sandals, if you are a runner and haven’t been wearing Oofos -you are missing out! I have Oofos flip flops as well as their sliders and they are incredible. I also have a pair of Hoka One One flip flops which are a bit firmer which I prefer sometime. They are both pricey as far as flip flops go, but they are so worth it. I have had the same Hoka sandals for three or four years now and they are still in great condition! The Oofos last a long time too, though after a couple years I bought a new pair. Not because they older one’s lot their support, but partly just because I wanted to.

I have tried a number of sock brands, and some have been quite good. Zensah has good socks, and I like Merino wool ones. However, the Feetures brand is still my favorite! Great cushioning, while not being too thick, and no seams mean no blisters or discomfort.

(Even when wearing great socks, you might still get blisters. Though a good pair of seamless socks and shoes that are the proper size definitely help! When going on long runs I put Vaseline on my feet to ensure blister prevention. Read about other blister prevention methods here!)

Not much of a surprise that so many of these items involve feet! They certainly take a beating when marathon training. Foot chair insoles are amazing though. If you need strong arch support-you have to try these! I have flat feet and on one foot I have the extra accessory navicular bone. It used to cause quite the problems when trying to run far distances, but then I discovered these insoles and I put them in 80% of my shoes. I always put them in the shoes I wear for long runs, and even put them in shoes I walk a lot in while traveling to cities where we do more walking than usual.

I don’t put them in every shoe I run in just to switch it up. And when I am running lower distances, my feet are good, and the insole isn’t as necessary.

The best sports bra that doesn’t chafe and offers good support is the Brooks Juno sports bra. You an adjust the strap length, and it has the clips in the back which make putting it on and taking it off easier. The straps do dig into my shoulders though which is annoying and can be a bit uncomfortable after a while.

Over a year ago I tried the CW-X brand sports bra and I love it!  The straps don’t dig in and it is the most comfortable of the high impact sports bras I have tried. The only downside is the back strap will chafe. I solved this by putting one of those big band aids on my back where the strap rubs. It’s kind of annoying, but the bra is so great in every other way, it seems worth it.

I don’t have any specific shoes to recommend, because I have worn all different brands and honestly don’t have a favorite. When looking to buy a new shoe I always check the weight (the lighter the better in most cases). I also check heel drop, the less the heel drop the better! Altra shoes are great because they are all zero drop, I talk here about the benefits of zero drop shoes. However, they have a unique foot shape, because they give your toes extra space. Which is awesome, except that the weird shape means I can’t use the insoles in them. I have shoes that have an 8mm drop, but I don’t buy any that are higher than that.

I also don’t have any specific tops. I’ve worn random amazon brands, Lululemon, Under Armor, New Balance, Asics, they all have great tops for running. Just don’t wear cotton shirts! It’s also nice when they are seamless, to avoid chafing and irritation. The majority of my tops do have seams though and it hasn’t been an issue.

I hope this has been a helpful post for any new marathoners out there! I also hope some long time runners found something useful here 🙂