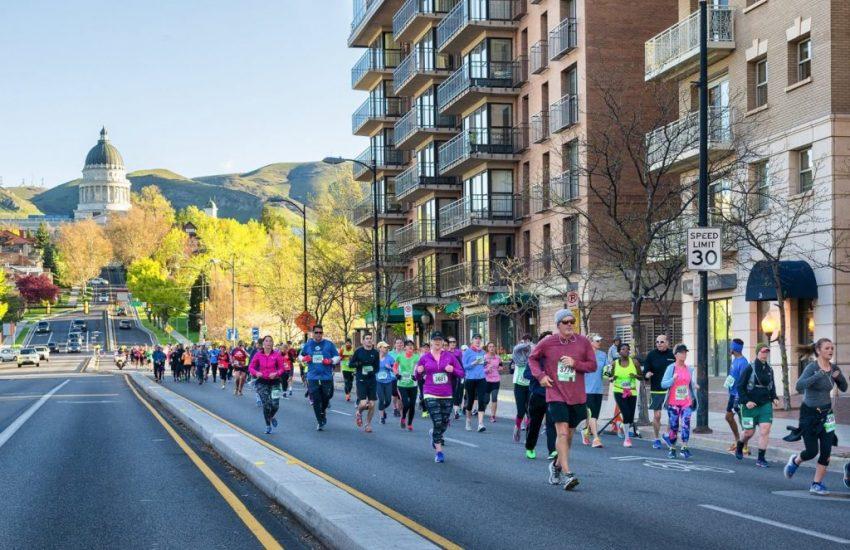 The standard amount of time people train for a marathon is 18 weeks. However you may see others that are running races pretty close together. If you are new to marathon running, then it’s best to stick to the 4 months for training. (Also, for any new runners, here are some tips on training for your first marathon!) Even more experienced runners wanting to PR (set a Personal Record) for sure should stick with the standard training cycle. But sometimes occasions arise and you have the chance to run a race, even though maybe you just finished one. Just remember not every race is about your finishing time. It can also just be about the experience. This happened with me in April. Even though the race I was looking into was just seven weeks after the last marathon, it seemed like such a cool opportunity so I went for it.

In December, after running a marathon in Arizona, I signed up for the Salt Lake City marathon which takes place in April. A week before the race, we learned we would be living in San Diego for a couple months. I looked up the San Diego marathon and saw that the Rock’n’Roll San Diego marathon and half would be taking place during our stay. I thought of signing up for the half, but running the full just seemed so much more exciting! And I liked the challenge of running two marathons so close together.

Hal Higdon actually has a training guide for when you run marathons close together and I based my training off of his plan. I took a week off of running after SLC (which gave me six weeks of actual training) and then began this new training plan. I did all of my training in San Diego, which was new. Prior to SD, all the races I did were in a different city.

Three weeks post SLC I began speedwork. The first couple weeks post marathon I felt pretty stiff while running-not feeling graceful at all. However once I hit that three week mark, my body started to loosen up and I was able to run free.

My goal was to run an 8:40 pace, so the speedwork wasn’t incredibly speedy. If I had the normal 18 weeks of training I would have been going for a faster time. Honestly, when I signed up I planned on taking it super easy. Like maybe not even try and get a sub 4. But, as usual, when training began I couldn’t help but have a goal. At that point, my slowest marathon was 4 hours, and I wanted to at least beat that. (Spoiler alert-I didn’t).

In San Diego we were living downtown near the convention center and I did most of my runs along the embarcadero path, which goes on for miles. It was the perfect route-with bathrooms and water fountains along the way. However, it began to get a tad boring. Especially for the shorter runs, I covered those first couple miles of the path sooo many times. I did switch it up on occasion, but not as much as I should have. Running the same route over and over can lead to injury, so I think that is in part to blame for the pain on race day.

Anyway, back to training. I ran five days a week, biked one day and had one complete rest day (aside from walking). My longest long run was 18 miles, and even though it’s not as long as usual, those last couple miles were tough because it was a hot and sunny day.

I mainly wore running shoes for flat feet, due to having accessory navicular syndrome. When I wear running shoes that don’t have that added arch support, I get very sore arches. Since switching to more appropriate shoes for my feet, and wearing insoles, I haven’t had any problems with my arches!

I tapered just for two weeks, which seemed like enough. I was feeling really good and well rested when race day came around. Of course, the race itself didn’t go as planned. As I said in my recap, I started having IT band pain and hobbled to the finish. I think this is partly because of my running route, and partly because the race course had a lot of slanted roads. I do sometimes wonder though if I had my longest long run be just 16 miles, would that have helped me in some way? Like maybe the injury was because I did too much in training? But I didn’t think I was pushing myself too hard. I guess we’ll never know. Overall though, I don’t think running two marathons close together is to blame. Maybe if the injury happened later in the race, but it happened between miles 10 and 12. I can cover 13 miles pretty easily. So I just don’t see how my shorter training cycle could have caused an injury so early on.

Also, a fellow runner blogger also had IT band pain at the same part of the same race! Her’s was a few years back. It’s kinda crazy though that it happened at the same time on the same course. This just further backs me up on the course being somewhat to blame. Having said that, I would still like to run it again, at least the half marathon.

I’m using the word injury, but it wasn’t as serious as all that. It did keep me from running for 15 days, but I never needed crutches, and was able to get back to running regularly three weeks post marathon.

Long story short-I don’t think I would run two marathons this close together again, mainly just because I love training for a marathon. I enjoy those 4 months of building mileage as much as I enjoy the race itself. So cutting it so short was kind of a bummer.

If you are wanting to run two races that are close-it can definitely be done! I just wouldn’t expect a great time, although you can still have a great time regardless!