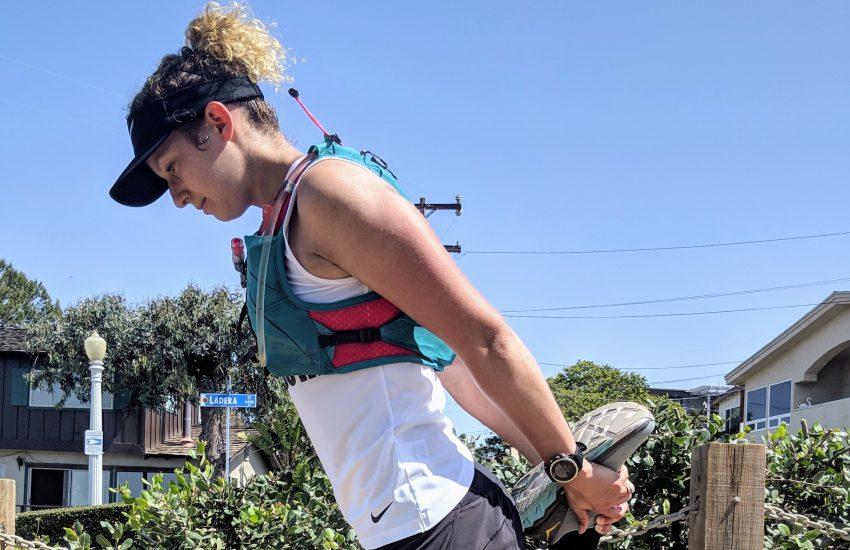 I started using a hydration pack in September of 2018. Prior to that in Santa Monica, I had the small handheld water bottle which I would refill as necessary.

In SF there weren’t water fountains around so I purchased the Dolfin Hydration Pack. I used it a few time and it worked well enough. It’s very minimalist, which makes it light, but I wished it had pockets. In SF I wore long sleeves most the time so there was no chafing. When we moved to Sacramento I tried it with a sleeveless shirt and it was rubbing and just too uncomfortable.

I returned to the drawing board to find something better. I had seen the Osprey brand in REI and looked them up online. I came across the Osprey Packs Duro 1.5 Running Hydration Vest, bought it, and haven’t looked back since. It’s lightweight, but it has so many pockets! When I use it I don’t need to also bring the Flipbelt so that’s nice. It doesn’t bounce and it somehow keep the water cold. I wear it with tank tops and have no issues with chafing.

When I bought it online I initially got a size too small so I had to return it and size up. To avoid that hassle, you should go to REI (or where ever else sells them) and try them on. It’s also twice the price of the DolfinPack, but you get what you pay for!

The only slight downside is if you need to take it off for some reason, it’s not a quick procedure due to how it fastens. I’ve only had to take it off like once mid run (I had a light windbreaker on, but it warmed up so I stuffed it in the back pocket of the Osprey), so it’s not like it’s a huge deal. I really only have positive things to say though about it. While running in Portland I crossed paths with another runner who had the same pack! She complimented me on it as she ran by 🙂 I don’t see myself switching hydration packs anytime soon!