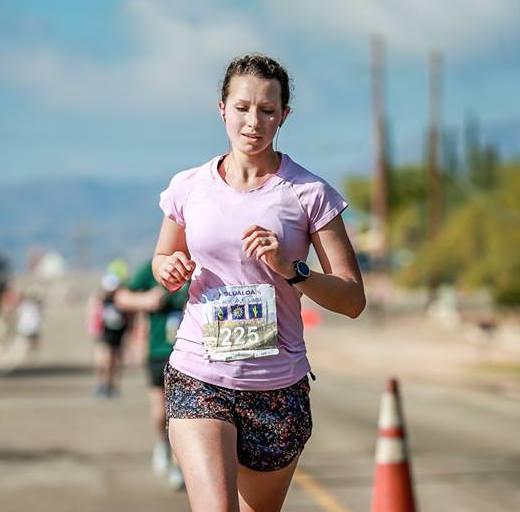 I was 17 miles into the Tucson Marathon. Nine miles to go. However, all I could think about was how badly I just wanted to stop and walk. How badly I just wanted to chug Gatorade. How badly I just wanted to forget about my goals. I kept going, but once I hit mile 20 things had only gotten worse. When a runner has hit between mile 20 and 25, outsiders may think, “They only have [6-1] more miles! They’re basically done!” Anyone who has ran a marathon will tell you that when you’ve hit the wall, those last few miles feel like they last forever. The last 5k is harder than running the 23 miles. In Tucson I felt so incredibly drained. I took so many walking breaks. I didn’t care anymore about reaching my goal time. I was bonking. I still wanted to finish what I started, I just has lost the motivation to care about how I got there.

What does it mean to ‘hit the wall’ and why does it happen?

So first off, let’s explain the what and why.

Bonking occurs when your body has run out of glycogen in your muscles. It then has to start burning fat instead, which is a much slower process and causes you to feel more drained. Some say you shouldn’t eat at all while running, that way your body gets used to burning fat instead of glycogen. Not only will you lose fat, but then hitting the wall won’t happen because your body has been trained to burn fat efficiently. I have gone on a 15 mile run without eating and I was able to make it. However, it was also on a cool, overcast day, so I feel like that’s partly why I felt decent.

I have certainly never tried to run a marathon without eating anything. And that 15 mile training run sans food was just an experiment, which I didn’t repeat. It isn’t impossible to do, I guess I just don’t think it’s worth it. Plus, how many serious distance runners do you know who don’t eat anything on long runs or race day? Yeah I don’t know any either. So, I’ll stick with what the crowd is doing.

Anyway, back to glycogen. “The body breaks down most carbohydrates from the foods we eat and converts them to a type of sugar called glucose. Glucose is the main source of fuel for our cells. When the body doesn’t need to use the glucose for energy, it stores it in the liver and muscles. This stored form of glucose is made up of many connected glucose molecules and is called glycogen. When the body needs a quick boost of energy or when the body isn’t getting glucose from food, glycogen is broken down to release glucose into the bloodstream to be used as fuel for the cells.”(kidshealth.org) Since the body using glycogen for fuel, that’s why runners carb load before a distance race.

Before a race, you store up as much glycogen as possible. Then as your racing, you have gels to keep giving your body carbs as you keep running.

People talk about having a carb heavy meal the night before the race. However, I don’t like the feeling of being stuffed, and having so much food still in my body on race day. My most carb heavy day is two days before the race. So if the race is on Sunday, I carb it up on Friday. I still eat carbs the day before the race of course, I just don’t go overboard with it. You also need to start carb loading a few days before race day. One method is to limit the carbs you eat for a few days, then a few days before race day, you increase your carb consumption. Limiting your carbs those days beforehand helps your body effectively store the carbs you eat later. Matt Fitzgerald talks about this in his book Racing Weight.

How to prevent it-Staying Hydrated

When I ran the Tucson Marathon, the main issue that caused me to hit the wall was I didn’t hydrate properly. I also went into this race thinking it would be easier than my previous marathon. Having read How Bad Do You Want It I should have known that that kind of thinking is detrimental on race day.

It’s important to wear a visor or sunglasses when racing to help the sun from draining you. You also should be drinking electrolytes, especially in the first half of a race. I was drinking only water in Arizona. I was taking salt tabs, but not as many as I should have. When you sweat you lose sodium and potassium, so you need to replenish those nutrients. Most sports drinks have a certain combination of water, sodium, potassium and sugar that hits the bloodstream in the right way and prevents dehydration and muscle cramping.

I ate enough carbs leading up the race, I just wasn’t hydrating properly. Plus I went into the race thinking I had it in the bag. But I hit the wall, and hit it hard.

How to prevent, or at least get over the wall-The right attitude going in

As I said, I went into the Arizona marathon thinking it would be much easier than the SF marathon and feeling confident I could PR by a decent amount. When you go into something thinking it’ll be relatively easy, and then you hit a rough patch, it seems to just come out of nowhere. You suddenly feel like you can’t go on, it wasn’t supposed to be this hard! If you go into races, and workouts, knowing and thinking about how it is going to be incredibly difficult, you will stay strong when it inevitably does become incredibly difficult.

For the SLC marathon I was prepared mentally for it to be tough. Around mile 21 I started to feel fatigued and wanted so badly to stop. However, I repeated the running mantras I had prepared and reminded myself that this is why I run marathons-because they are tough! I may have slowed my pace, but I’m proud that I didn’t walk and kept going. I kept reminding myself why I was out there.

Funny enough, my very first marathon I didn’t hit the wall. I carbed up enough, I stayed hydrated (it was also ideal weather-cloudy and cool the entire time) and I went into it thinking how it would be one of the hardest things I’ve ever done. You will always feel tired nearing the end of a marathon, but that doesn’t mean you will hit the wall. Hitting the wall, as we’ve discussed, it’s much more intense than just being tired. I was tired during my first race, but I never felt like I simply couldn’t go on.

Bonking also happens on training runs. When you have a high mileage week it’s important to eat enough nutrient dense carbs. For long runs I use the same tactic I use for races-if my long run is on Saturday, then on Thursday I eat the most carbs in preparation. Just recently I hit the wall on a 16 mile run. I ran later than usual so as the run went on, it just got hotter and hotter. Then at mile 13 I ran out of the Gatorade I had in my hydration vest. At mile 14 I felt like I just couldn’t keep going. That’s when you start thinking how it doesn’t matter whether you run those last few miles. You’ve ran enough for today. Not like this is even the race. Just quit now. Call an uber and go home.

I stayed strong and finished those two miles-even with the many walking breaks. At times like that, I like to think about how that’s real marathon training. Training runs that are the hardest to complete, the ones that fatigue you the most, those are what will prepare you for race day. I try to remember to be grateful for those tough runs and use that to make me stronger for race day

Have you not eaten anything while running a marathon? Or even on a long training run? What has helped you from hitting the wall?