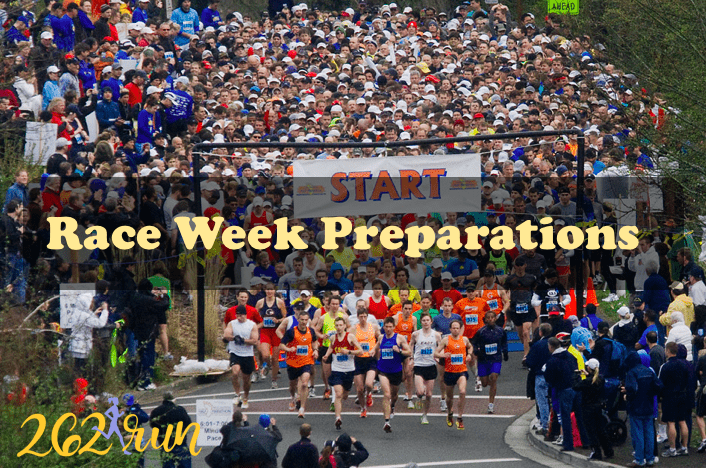 Last week was marathon week! As I prepared for my fourth marathon, I thought I would share what I do the week leading up to a race! (Stay tuned for my race recap on the San Diego Marathon!)

This is something that is begun a few weeks from race day. Race week I am down to my fewest miles. I don’t do any kind of speed work or hills (unless they’re small, and if big hills are unavoidable, I walk up them). This will further help to rest up my legs.

When reading Racing Weight by Matt Fitzgerald, he says the proper way to carb load, is by limiting your carbs prior to increasing them. If my race is on a Sunday, I will limit how many carbs I have till Thursday or even wait till Friday. I still have some carbs, I just avoid foods that are obviously high in carbohydrates.

As  I said above, after limiting my carbs, I then increase them. I eat foods such as bagels, sweet potatoes, dried and fresh mango, bananas, rice cakes, and sometimes pasta (I’m not a big fan of pasta, but I sometimes make the pasta made out of lenils, black beans or quinoa). If the race is on a Sunday, I eat the most carbs on Friday rather than Saturday. I do this so I don’t feel stuffed the morning of the race, but my body still has those extra carbs stored away.

-Continue going to the gym but I take it easy

I go to the gym Monday-Friday and taper week isn’t any different. However, the exercises I do are easier and lighter. I use lighter weights early on in the week, and I don’t do any leg specific workouts. I focus on mobility and hip strengthening, as well as abs. The three days or so before the race I avoid weights, and do stretching while also doing mobility movements. Even though the last few days are things I could just do at home, I like to continue with my routine of going to the gym. Plus that’s something Scott and do together every day and I enjoy that time with him.

-Start setting aside everything I will need

If you are traveling to a race this is especially important. I will start collecting all the various things I will need the very start of the week. I do this partly because I am excited, but also because I am worried I will forget something. If you want to see a list of that I think are race essentials, check out my race gear checklist!

-Avoid the expo on race eve if possible

If the expo is a two day event, I will try and go on the first day rather than the second. If it’s a small expo it’s not really a big deal, but if getting your bib requires a lot of walking it’s best to do it avoid it the day before race day. On race eve you want to rest your feet as much as possible.

-Get plenty of sleep the week leading up to the race

The night before the race it’s typical to not get much sleep. Laying down and resting, even if you’re not getting sound sleep, is still helping. Since it’s expected to not sleep well the night before, it is extra important to sleep well the days leading up to the race and taking naps if needed.

Blisters don’t have to be a given when running a marathon. For the first two marathons (and all the long training runs I did prior to those two) I wore Injiji toe sock liner which prevented me from ever getting a blister. The down side is it can make your shoes just a tad snug if you don’t get a size big enough.

The running shoes I bought while training for SLC we just a tad too tight when I wore the liner, so I tried running without it. During all my training runs I never got a blister. However for the actual race I did get one minor one.

Some people tape their toes with duct tape or medical tape to prevent blisters. I tried it once and I didn’t get blisters, but the tape was a pain to take off after so I didn’t do it again. If you put a glob of vaseline on your foot that can help. I did this for San Diego and I didn’t get any blisters.

Cutting your toe nails the night before the race (and before every long run) is a must for everyone. It won’t necessarily prevent blisters, but it will prevent some potential painful cuts.

If you are able to do cryo a few times in the week leading up it will defineily help your legs feel fresh. Cryo is pricey though (I just do it like once a month) so ice baths or ice packs is the cheaper alternative. I would love to get a part time job at a cryotherapy place just to get free, or at least discounted, cryo sessions haha.

Compression boots are the same story-pretty pricey. I would love to someday have a pair of these at home. For now I go to cryo places that have them, but again I don’t do that as frequently as I would like. I do own compression recovery socks though and wearing those while sleeping seems to help.

Along with icing and compression, I basically utilize all the runner recovery tools I have.

I have thought of going to a specific chiropractor, but aside from the higher price, the fact that we move around a lot doesn’t make it seem worth it. Once we are more settled, maybe I’ll check out a sports chiropractor and see if it’s any better than The Joint.

~~So the day before RnR San Diego, we actually went to a sports chiropractor. We were walking home from the gym and passed one we pass everyday, and thought we would see if we could walk in. They fit us in, and it was such a better experience than The Joint! The Joint is great for a quick pop, but this place was so much more thorough, and it wasn’t even that much more expensive!

-Write out my paces

I calculate what my pace would be at intervals throughout the race and input into the word document that I use for training. In Salt Lake I also wrote my paces on a paper bracelet I made (that race didn’t go as planned, so those paces ended up not applying). I will be making the pace bracelet again for San Diego.

Taper for a race can do weird things to you. There can be moments where you suddenly start to rethink everything and even doubt your training. Even though I’ve gone on 20-22 mile training runs, when I look at the race map, running 26 miles begins to seem crazy far! During these times, I have found it helpful to watch movies such as Spirit of the Marathon and other such running movies. Even more than movies though, there are so many great running books out there that will inspire you and give you the confidence you need.

Coming down with a cold or the flu a few days before the race would be horrible timing! I make sure to be taking my daily vitamins and eat nutrient dense food. I also am sure to eat oranges or take vitamin c.

-Avoid walking much the day before

As talked about above, I try to avoid walking too much prior to the race. I have been pretty successful with this with the races I’ve done. For SF I walked the most prior to the race-just over 11,000. More than I should have, but the next two I did much better at lowering that number.

One reason I don’t sleep great before a race is because I am paranoid about over sleeping. (Ever watch that Seinfeld episode with the character named John Paul who is preparing for the NYC marathon) Even though for each marathon I have woken up before the alarm even goes off, I still set two alarms, five minutes apart, just in case.

On race morning I want everything to be ready to go. No searching around to find a sock, or where I put the almond butter. I put literally everything out in advance. I have my clothes ready on a chair, or bathroom counter. I have my Flipbelt set out, with everything that I’m putting in it laid out beside it. I have my breakfast lined up on the counter. On the memo app on my phone, I will have typed out motivational quotes, mantras and scripture verses for me to read before the start.

I, like most people I think, hate being rushed. That’s a common stress dream I have, where I am late and in a rush to get somewhere. So having everything ready to go and in order, makes me feel at ease and makes for a relaxed race morning.

Race morning you might let your nerves get the best of you and suddenly wonder if you did enough to prepare. Should I have done one more long run? Was my last set of mile repeats fast enough? Don’t let those doubts get the best of you. Remind yourself that you did your best during training (even if you came across some hiccups during training, what matters is you gave it your best). Also, remember to control the controllables. Once it’s race morning, you can no longer control how training went, so best to just feel confident and trust yourself.

-Be prepared for anything

26.2 miles is a long way (also, basically all marathons are in fact longer than 26.2, especially loop courses. My four races have ranged from 26.4 to 26.7 miles). When you’re running that long, anything could happen. You could end up having a great day and running better than expected, or you could have something that’s out of your control go wrong.

Nobody wants a DNF (Did Not Finish), nobody wants to run an hour slower than their projected finishing time either. Sometimes you have to drop out though if you feel an injury coming on. Sometimes you have to swallow your pride and shuffle to the finish in a much slower time than you wanted. It happens. It’s good to have a time goal you want to meet, but don’t set your heart on it. Because if you are unable to reach that goal, it can feel devastating.

My last marathon did not go as planned, it became my goal to simply finish, regardless of time. At least finishing was in my control. I also went into the race with a goal to focus on gratitude. Even though I ended up finishing much slower, I still focused on what I was grateful for, and it helped me to not feel so down about my finishing time.

-If you are traveling to the race

Here are some tips for those that are not running a race in their hometown. SD was my first time running where I was living, and it felt so weird haha. It was nice though being in the comfort of my own place with everything I need there.

-Make a list ahead of what I need to bring

-Lay everything out, go through the list, then pack

-Breakfast that can easily be prepared in hotel

-Don’t forget to pack the things you will need after the race, to help recovery

What do you do in the final week to prepare? Anyone have any races coming up soon?