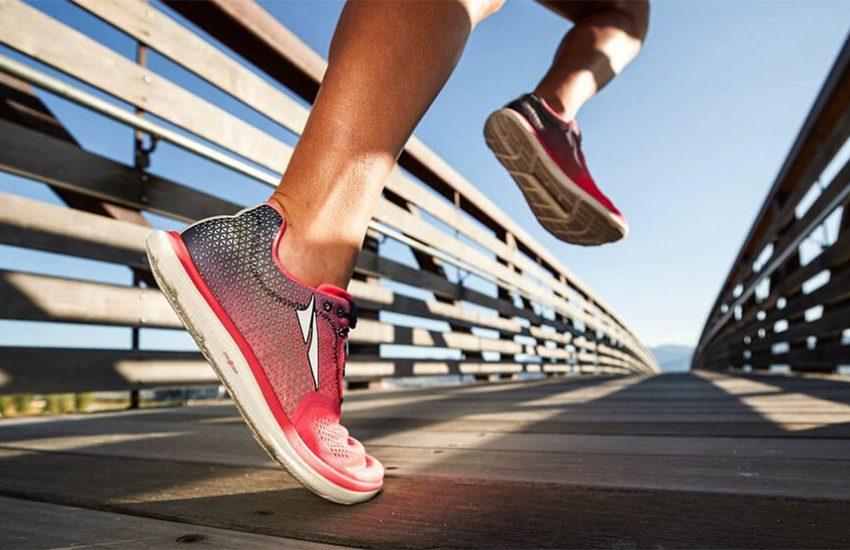 When shopping for running shoes, you have undoubtedly noticed the specs section where it lists the weight of the shoe, whether it is a stability shoe or a neutral shoe, what the heel drop is, and other such information. I used to pay no attention to the heel drop number, but the past few weeks it has become my obsession.

It all started when I realized I was in need of a new pair of running shoes, I’m trying to be more fiscally responsible, so I searched around on Amazon, looking for the best option for the best price. I narrowed it down to two different shoes-one my New Balance (a tried and true brand), the other, Altra-a brand I have never tried but have heard a lot about. In the end I went with this Altra shoe.

When I got the shoe I saw that it said zero drop on the side. Even though I paid little attention to heel drop, I still did know what zero drop meant. A couple years ago my husband had a friend who was all about zero drop and had all the reasons why every runner should wear only zero drop. I decided to google it myself, now that I had inadvertently bought a pair, I figured I should learn about them.

What does ‘zero drop’ mean?

When the specs of a shoe list heel drop, it means the distance between how high your heel is, compared to how low the toe is. Zero drop, is when there is no difference between the heel and toe. In case that didn’t make sense-the below image should help.

The toe is obviously never higher than the heel, so it’s always how much higher is the heel from the toe. (That might make you wonder why people call it heel drop. well it’s actually short for ‘heel to toe drop’.)

It used to be that the only zero drop shoes where the minimalist running shoe/barefoot running shoe. However, Altra (created by father and son, Hawk and Harper) has made itself into the brand that created the first cushioned shoes with zero drop. “Our shoes aren’t minimalist; our shoes offer cushioning and protection for runners who want to run with better technique,” Harper contends. “It’s about running naturally, and running barefoot is the purest way to run because our feet have zero drop.”

Why does it matter what the heel drop of a shoe is?

Good question! As more experienced runners will know, in proper running form you strike with the toes and your heel touches the ground minimally. However, with shoes that have a higher heel drop, cause you to actually hit with your heel more often.

Where shoes with higher heels can also shorten your calf bones. Especially if outside of running, you were high heels which obviously tend to have quite a drastic heel in comparison to running shoes. But yes, even a running shoe with a 10mm heel can still effect that calf muscle.

Zero drop shoes help you have better form by causing you to strike with your forefoot, which give you better form and strengthen your calf.

Zero drop can also be a contributing factor in injury prevention

Turns out that by running in zero drop shoes (or at least shoes with a lower drop) can also help prevent injuries! Once again, the reason being because it helps you have proper form.

I have struggled with IT Band issues, and hope that being mindful of my shoes and getting rid of ones that have more than a 4mm heel drop, will help alleviate that problem. That, along with rebounding, ITB strengthening, and prioritizing rest and recovery. There is not magical shoe that will cure your running problems. Just like there’s no magic pill that will make you lose weight. But wearing the right shoes is definitely one of the ingredients when making a successful runner.

How to transition to zero drop

Because zero drop shoes utilize some muscles that other shoes don’t, it’s best to integrate them into your running carefully. So far I have only worn them on my shortest run of the week. Soon I will start wearing them on my shortest run, as well as my second shortest run. Then before long I will wear them on a longer run.  This article in Runnersworld stated this about transitioning shoes, “if you don’t conscientiously work on form and strength along with minimalist running, you could wind up with sore calf muscles, strained Achilles tendons, aching feet or more serious injuries”

Then in the future, I will wear primarily zero drop on all runs. It’s good to wear different styles of shoes so that your feet are using the same muscles each time, so I will still keep 4mm shoes but I don’t know if I will go higher than that. I still have shoes as high as 10mm currently, but they aren’t old enough to toss, so I will probably keep them around and just lessen how frequently I wear them.

As I said above, there is a difference between minimal running shoes, and zero drop shoes. If you are a distance runner, especially a newer runner, you probably shouldn’t wear minimalist running shoes. Inov-8 is a brand that as zero drop shoes, as well as shoes that have a low drop number. Saucony shoes tend to be 4mm drop or around there (I recently got these and love them!). Merrill has zero drop shoes, but their’s tend to be more on the minimalist side. New Balance has some low drop shoes, but make sure you check out the specs because some have a pretty high drop. Then of course there’s Altra, where every shoe is a zero drop.