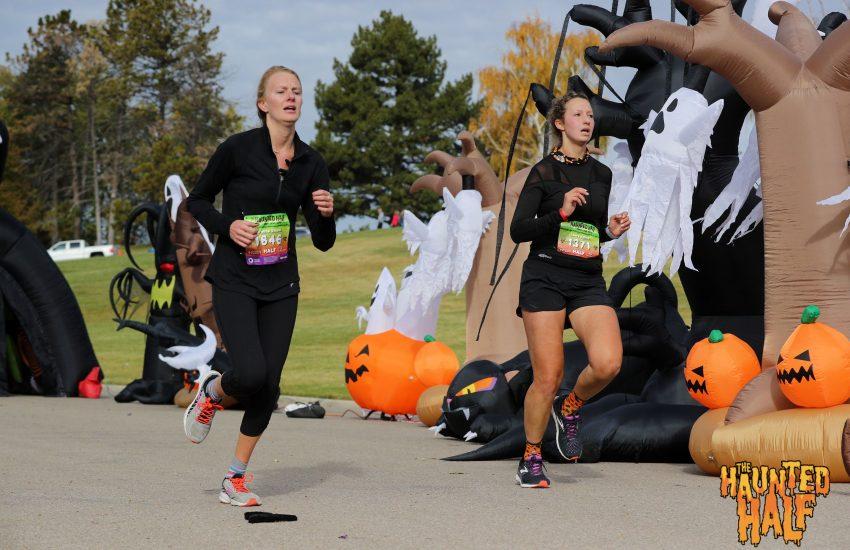 I did things a bit out of order when it comes to racing. I did road marathons, before ever doing a road half. I say “road” because I did run a trail half, the Golden Gate Coastal Trail race. However, trail races are very different than road races. It was also four years between that trail race and my next times racing. So much time had already passed. My first half marathon was The Haunted Half in October of 2019.

Since I had ran four full’s before running a half, I went into the half with a different mindset. I remember at mile 7 thinking how crazy it was that I was already half way through! I read a blog post by a runner who ran marathons, then did a 50 miler. The next time she ran a marathon, she would think that at least she was only running 26 miles not 50. That’s basically the mindset I had and I think it helped me a lot. Because my body is used to running over 13 miles in training runs, running the half didn’t feel daunting to me. What did feel daunting was my goal finish time.

Anyway, as someone who has ran both full marathons and half, here is what I found to be the biggest differences.

1. The half goes by so quickly!

That was my thought when I was at mile ten of the half marathon. It seemed so crazy that I only had 3 miles to go. When you have 3 miles to go at the end of a marathon, those three miles feel like eternity! But with the half, it just felt so weird that I was already in the final 5k!

2. You don’t need to be so prepared with what you bring.

With a marathon, I make a marathon checklist of what I need to have. I place my Flipbelt out, and line up everything I am bringing in it so that nothing is forgotten. I make sure I have my 4 gels, Carmex or Aquaphor, tissues, salt pills, and headphones in case I get the urge to play music. Not to mention be very particular with race week preparations. With the half marathon, I just brought one gel, and some tissue (and the main reason I brought that was because I had lingering sniffles from being sick the week before). I tapered my running and did a minor carb load type thing. But it definitely wasn’t as much work to prepare for. It was nice to have fewer things in my Flipbelt which therefore made it lighter. Although with a marathon it does get lighter as you eat the gels.

3. You have more energy to push yourself at the end.

At the end of a marathon, it’s a push just to keep moving. So, it’s not that you’re not pushing yourself, but you’re most likely not sprinting. With the half marathon I was definitely tired and was looking forward to crossing that finish line. However, I still had enough energy to really surge at the end. My husband said that’s the most intense look I’ve had at the end of the race, and it’s because I still had gas left in the tank! The marathon distance is so depleting that you don’t have the energy to look intense at the end (at least I don’t).

This was the first race where I finished in my goal time and it felt amazing! For each marathon it was a different reason why I fell short of my goal. From going out too fast, to getting injured half way through, not understanding the how long a marathon actually is, to hitting the wall. In a half marathon, because it’s half the distance, there is less that can go wrong, and you have a bit more control. Of course plenty of people run marathons and achieve their goal time. I think I just wasn’t experienced enough in my previous races, so I always ended up falling short. But again, the half isn’t as depleting, and less distance means less time for something to go wrong.

5. In the marathon you have to pull out the big guns.

The marathon distance requires all that you’ve got. Finishing the race, you need to use not only all the physical strength you have, but your mental and emotional strength as well. Crowd support makes a bigger difference and mantras become a necessity. They say the first half of a marathon is ran with your legs, and the second half it ran with your heart and that’s so true! It’s a major mind over body experience.

In the half I was giving it all I had, but it was easier to do because I didn’t feel like I was being pushed to my mental and emotional limits. Physically I was pushing myself to my limits, but when your brain isn’t being pushed as much, you handle it so much better. (Read this to discover what it takes to run a marathon!)

One thing that was similar with both, is that I feel like I’m in a haze when I finish. It takes me a few minutes to feel clear headed and able to think straight. I guess I wasn’t expecting that at the end of the half. It was weird because I didn’t feel drained, but I was feeling hazy as I got the medal.

I loved my half marathon experience and am looking forward to running another one! But I also love the 26.2 distance. The way it pushes you in every way, and the way you feel so drained at the end. The feeling of giving something all the physical, mental and emotional strength you have. It’s such a rewarding feeling!

I do wish I had ran a half sooner though! They are definitely worth it and are also an amazing feat of the human body!