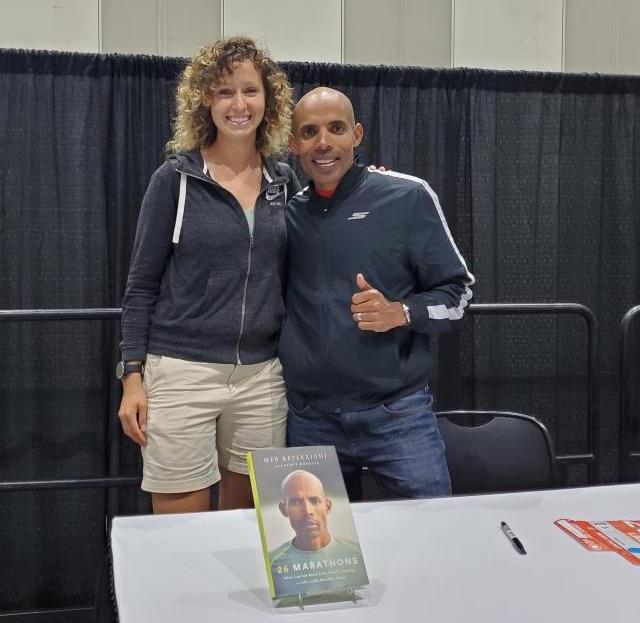 My favorite running related books! The only ones on here that aren’t available on audio are Meb for Mortals and Marathon by Hal Higdon.

How Bad Do You Want It? Mastering the Psychology of Mind Over Muscle-Matt Fitzgerald

This was the first running related book I ever read! It tells the stories of various endurance athletes-runners, cyclists, rowers, triathletes-and what mental mistakes they made which they then learned from. The power of mind over matter. It drew me in from the very first story, and I didn’t want to put it down! A must read for runners!

Meb For Mortals: How to Run, Think, and Eat like a Champion Marathoner– Meb Keflezighi

In this book Olympian and marathon champ Meb gives us his ‘secrets’ to attaining marathon success. One of my favorite parts is when he talks about how important your diet is. He tells a story of a time he was at a church function and everyone but him was enjoying a donut. He turns to his friends and says, “How is it fair that I’m the only one here who is running 100+ miles a week, yet I’m the only one not having a donut?”. The friend replies, “You’re also the only one here who has won the Boston Marathon.” If you want to achieve what others can’t, you need to be willing to do what others aren’t-including staying away from foods that cause your body more harm than good. Plus, that donut you eat post marathon (or whatever you may be training for) will taste all the sweeter!

26 Marathons: What I Learned About Faith, Identity, Running, and Life from My Marathon Career– Meb Keflezighi

This is one of my top favorites. Meb takes you through each of the 26 marathons he has ran and the lessons he learned from each one. Lessons that can be applied in running, but also in life. Listen to this while running and it’s sure to make you get emotional. This one isn’t biographical per se, but it’s written in more of a story telling way than Meb for Mortals is. I liked this one even better because of that.

Eat and Run: My Unlikely Journey to Ultramarathon Greatness-Scott Jurek

I dare you to read this book and NOT fantasize about running a 100 mile race! In this autobiographical book he talks about his childhood and what lead him to his passion for running, as well as his passion for healthy eating. He shares a vegan recipe to go along with each chapter. His mental fortitude and strength is incredible! This book sparked the desire in me to run an ultra someday. I don’t think this is the year it’ll happen for me-but I will be running one in the near future!

Let Your Mind Run: A Memoir of Thinking My Way to Victory -Deena Kastor

Another on of my top favorite running books! I’ve read it twice now (the audible version is great for listening to while running) and it’s just so motivational and relatable. Being an Olympic medalist or marathon record holders isn’t relatable-but any runner can relate to her inner struggle and determination. Yet another book about mind over matter. You of course need to train your body to run, but training your mind is just as important! This book makes me think of the quote, “Be mindful of what you say about yourself, because you are always listening.”

I read this book shortly after reading the Scott Jurek book, and this one fanned that ultra flame! Also autobiographical, and also just plain crazy some of the things he pushed himself to do-such as doing a 200+ mile run!

Marathon: The Ultimate Training Guide: Advice, Plans, and Programs for Half and Full Marathons-Hal Higdon

I read this one before running a marathon and it is definitely helpful. It has stories and helpful tips and tricks for how to run a successful race. I also use his training guides and they’ve worked well for me. You can access his training plans for free on his website.

The autobiography of one of the pioneers in womens’ running. In her book she talks about her childhood and the influence her parents had on her, as well as the influence of the men around her-be it positive or negative. The challenges of being a determined woman who believed anything was possible, in a time when women weren’t expected to achieve much in the world of fitness or business. It’s an amazing book and one worth checking out! I would listen to this one while running and loved it!

Run the Mile You’re In: Finding God in Every Step-Ryan Hall

I actually just started this one, but I’m including it because I already love it. He tells stories from his childhood, into adulthood and how his faith has impacted his running.

Edit: I have now finished this book and loved it! It will be one I will be rereading in the near future!

The majority of this book isn’t about running, and it gets so heavy that I wouldn’t recommend listening to it while exercising. The first quarter of the book is about Louis Zamperini and how he got into running and went to the 1936 Olympics hosted by Adolf Hitler’s Germany. The book goes on to tell the story of how he was on a military plane that crashed in the ocean, and he along with some of the others lived on a life raft. When they floated to shore, it was onto enemy territory and he came a POW. Once released he struggled with PTSD and became an alcoholic. It’s quite the story, but the ending is guaranteed to make you cry (you’ll probably cry throughout the book TBH). It’s an amazing, inspiring book.

This book isn’t at all about running, however it is about racing. Hillenbrand has only written two books, but both are worth reading whether you’re a runner or not. This one makes the running list though because it’s about people who persevered and succeeded in the face of doubt. When she talks about the races themselves, it’s as exciting as listening to runners describing their races in detail. It will inspire you to push yourself and (as cheesy as it sounds) follow your dreams, even if others don’t think you can make it.

Have you read any of these books? What are some books that have helped you with your running?

Check out my other post about books that will help you live a healthier lifestyle! Plus any of these books would make a great gifts, find more gift ideas for runners in my other post!