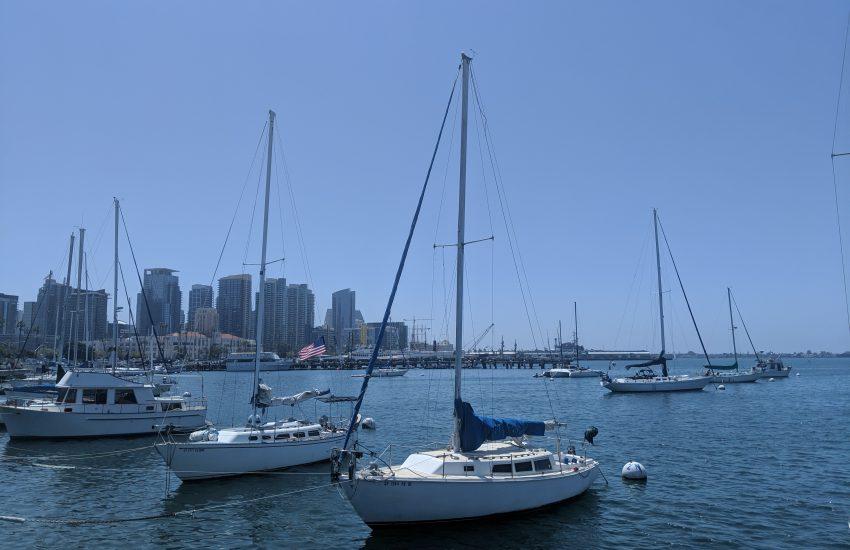 We lived in San Diego for just two months. Mid April to mid June. While there, I ran the Rock’n’Roll San Diego Marathon. We were living downtown so that’s where most of these restaurants are.

San Diego was surprisingly chilly when we lived there. We were familiar with May Grey and June Gloom from when we lived in LA (check out my list of best restaurants in Santa Monica!). However, it seemed worse here. We also didn’t like living downtown as much as we thought we would. We did however, love being able to walk almost everywhere. Downtown SD has plenty of great restaurants to choose from, so not complaints there! Speaking of food, here’s so of our favorite places to eat!

We came here almost weekly. It gets busier later in the evening. Thanks to that, when we came for dinner around 5/5:30, we would always have the place to ourselves which was nice. They do have booths though, so even if it was busy, you can still have some privacy.

There was an older couple working who I assume are the owners. They were both incredibly nice and fun to talk to. They had an amazing Unagi hotplate (I love freshwater eel!) They also had a large variety of rolls, ramen as well as decent sashimi.

Nara sushi was a place we went to on a regular basis because it was inexpensive, we had a booth, and it was good sushi. We only went to Nobu once, but it was absolutely fantastic! We went here once before back in 2016 and I remembered loving it, so I was looking forward to going back. It’s expensive, but the fish is so incredibly fresh! The server was wonderful, friendly, yet professional. We got there right as it opened, so we didn’t have anyone seating too close to us throughout out stay.

As you can tell by the name, this one is more of a bar, but a bar that has amazing food! The seating is pretty close, and it’s not a large space. One of the days, we were able to sit outside and it was much better. I had the paella which was delish, as well as the salmon and the farmer’s vegetable skillet. Scott tried the ribs, truffle fries, burger and their mushroom and brie soup (I was surprised how good that one was). They have a pretty large menu, so there’s a lot we didn’t try, but what we did have, we loved! If you get there before it gets busy, and are able to sit outside it’s perfect.

They have a delish chai latte here, but the real plus is that you get to play with cats! A fun experience for sure. All the cats are also up for adoption.

This restaurant specializes in shared, smaller plates. We ordered a total of six, however we could have done 4 or 5 and been good. We finished each of the dishes though! They have a burger, but it’s made with a steamed bun (which if you have read other favorite restaurant posts, you may know that I love steamed buns). The meat was also such high quality-along with all other ingredients in every dish-which made it a delicious and unique cheeseburger! The fish dishes were also incredibly fresh! The ambiance was also unique. Once again, we got here early so it was quiet while we ate.

We were walking distance to the Embarcadero and I had noticed this place a few times, and shortly before leaving we finally made it inside. They apparently were on Foodnetworks Cupcake Wars and won, so that’s pretty neat. And the cupcakes didn’t disappoint! Light, fluffy, moist cake with smooth, sweet, creamy frosting. We went to a cupcake place in Liberty Station where we bought a cupcake which was dry, and had that frosting that coats your mouth. Frost Me was nothing like that. They have so many fun flavors too! I had to try vanilla, it may be basic, but it’s my favorite flavor. The chocolate one was also superb.

We actually never ate in the restaurant, but we lived across the street and ordered to-go from it twice (one of the times being after I ran the San Diego Marathon!) They are famous for their German pancake. I tried the cinnamon one and it reminded me of monkey bread. We also tried their French toast and omlettes, all of which were wonderful!

We ate here twice, both times we both ordered the same thing. I suppose I should have branched out for the sake of the blog, but I just love eggs benedict. The English muffin they use was so delish! Definitely made in house. Scott ordered the Cusp Chile Relleno and ate all of it. The views were amazing! The table faces the window, which is unique but such a great idea. When you’re eating somewhere with a great view, of course you want to be facing it!

We happened upon this restaurant and was great! Wonderful seafood and steak! They also had a yummy and unique ceviche dish as well as some delicious beef tartar. Very friendly staff, and the restaurant wasn’t too crowded.

Burger Lounge is a chain, but I am including it here because I think it was the best burger place in downtown SD. We ate at Gaslamp Burger a couple times, but it was lacking. Burger Lounge has great ingredients and we loved ordering the Paleo Burger. We got in the habit of coming here for lunch and that staff was great and took the time getting to know us.

The Latin Chef and Machu Picchu Bar and Restaurant

On our search for the best (Peruvian) ceviche, we tried four different places in the downtown SD area. One of best and freshest was the Latin Chef in the Liberty Station area. It’s a casual place, but with great food! We ordered ceviche, tigre de leche (which we didn’t like as much because the fish was chopped more fine rather than chunks) as well as some of their fish entrees and soup. There were all sorts of other restaurants in this area, including Nekter Juice Bar which I have never mentioned before. But Nekter is a favorite of ours for amazing fresh juices!

Machu Picchu was also really good. A nice restaurant/bar with good seating and good service. It’s in a touristy part of town surrounded by other restaurants. So there’s a lot to choose from. This place was definitely a good choice!

San Diego also has the steakhouse chains Flemming’s and Morton’s, both of which were as delicious as always. There is also a Sidecar Donuts about a half hour north of downtown San Diego so we made sure to make our way up there.

Have you been to San Diego? What were some of your fav’s?