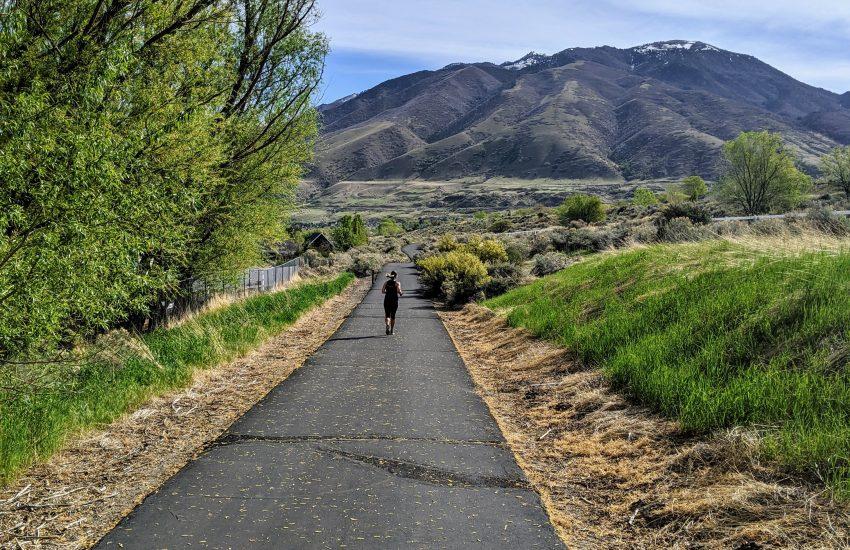 For starters-what is a virtual race? A virtual race one that you registered for and receive the usually swag-shirt and medal primarily-but you run the race on your own, when and where you choose. Virtual races are cheaper than official race, since there is way less time and money needed to put it together. There is a time frame set for the race, they usually give you a couple months in which to cover the distance. As I said, you do it anytime during that time frame, submit your time when you’re done, add the new medal to the display and you’re done!

I ran my first virtual race in December, for the Tucson Marathon. As I said in the race recap, I wasn’t able to attend the race, but I was ready to run 26.2 so I went ahead and ran it on my own. (I emailed the Tucson marathon with my race stats and they sent me the race tee and medal!) I also ran a half marathon virtually, once in March (but I wasn’t racing it, just running it) and another this past weekend! (which I did race-read how it went on my virtual half marathon race recap!) So, these tips are coming from my experience with both distances, as well as things that have helped me just when running a long run!

If your virtual race is a marathon, I think it’s easier to have that race day excitement, even though it isn’t an official race, just because running over 26 miles is a big deal whether it’s official or not! For me, running 13 miles doesn’t feel all that special. When preparing for my virtual half I really focused on thinking of it like I would an actual race. I really built it up, and counted down the days, made a pace bracelet, referred to it as “race day” and really made myself think of it as being just as important as an official race. If you are thinking of it as less important than an official race you won’t be excited about it! And excitement is a key element when racing.

2. Prepare yourself for the last few miles

There are a number of differences between an official race and a virtual race, a huge difference I hadn’t anticipated was how hard those last few miles would be. In every long distance race the last few miles are always crazy tough. But I didn’t fully realize what a difference crowd support makes! And with all the races I’ve run, there tends to be way more crowd support during the last couple miles. Having them cheering you on helps so much when you are physically and mentally ready to quit. Running a virtual race, you don’t have anyone cheering for you (unless you get family and friends to spread out over the last few miles to cheer you).

During my virtual marathon I was thinking of every running mantra I could to try and push me forward. I don’t think there’s any way of avoiding the difficulty of those last miles, but going into knowing what to expect will help somewhat. You can make a game plan for when to do when it hits you, similar to what I wrote for how to avoid hitting the wall.

This one might seem obvious, but make sure you have a planned route for the whole distance. Also make sure it’s a route you will like for racing. This is one of the benefits of virtual races, you decide how hilly or flat the course is! Planning it out in advance is important because while racing you don’t want to exert the mental energy it takes to figure out what direction you should run in.

I think this is my favorite part of a virtual race-not worrying about missing a bus or getting to the start in time! You can start whenever you want! Before official races I don’t usually sleep the best, I’m constantly waking up to check the time to be sure I didn’t oversleep. For the virtual race I slept great because there was no fear of oversleeping!

5. Have a running buddy! Imaginary or real

Right now, virtual races are popular because we aren’t supposed to be in close proximity to other people. So, having a running buddy might not fit for this particular time. But for future people who will read this-get a running buddy to do the virtual race with you! Heck, even during social distancing you could have a buddy do the same race and you could run it at the same time, just not together. But having that other person to encourage you and get you pumped up is great! Having someone else physically with you will also help when you hit those last miles and you want to stop.

Which by the way, even an imaginary running buddy works! When I am having a really hard time, I pretend someone is running with me and in my head, I say things to them to encourage them to keep going. By telling them uplifting things to make them feel better, I in turn end up feeling better! I like to imagine someone I love, usually one of my sisters. I have used this tactic during difficult long runs and speed sessions (read other tips for a successful long run!)

I hope this helps anyone out there training for a virtual race! I know we’re all waiting for the day when we can be around people again and experience an official race! But for now, I’m just grateful we can still run and participate in virtual races.